What is a Probability Distribution?

There are many different types of probability distributions in statistics including:

The sum of all the probabilities in a probability distribution is always 100% (or 1 as a decimal).

Probability distributions can be shown in tables and graphs or they can also be described by a formula. For example, the binomial formula is used to calculate binomial probabilities.

The following table shows the probability distribution of a tomato packing plant receiving rotten tomatoes. Note that if you add all of the probabilities in the second row, they add up to 1 (.95 + .02 +.02 + 0.01 = 1).

Note: Finding the area under a curve requires a little integral calculus, which you won’t get into in elementary statistics. Therefore, you’ll have to take a leap of faith and just accept that the area under the curve is 1!

A probability distribution table links every outcome of a statistical experiment with the probability of the event occurring. The outcome of an experiment is listed as a random variable, usually written as a capital letter (for example, X or Y). For example, if you were to toss a coin three times, the possible outcomes are:

The following table lists the random variable (the number of heads) along with the probability of you getting either 0, 1, 2, or 3 heads.

Of course, not all probability tables are quite as simple as this one. For example, the binomial distribution table lists common probabilities for values of n (the number of trials in an experiment). 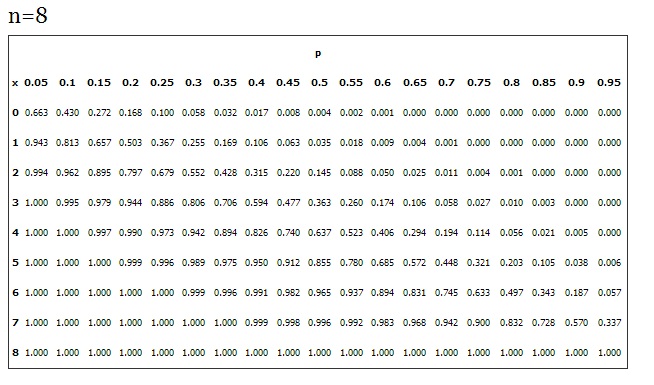 The more times an experiment is run, the more possible outcomes there are. the above table shows probabilities for n = 8, and as you can probably see — the table is quite large. However, what this means is that you, as an experimenter, don’t have to go through the trouble of writing out all of the possible outcomes (like the coin toss outcomes of TTT, TTH, THT, HTT, THH, HTH, HHT, HHH) for each experiment you run. Instead, you can refer to a probability distribution table that fits your experiment.

Click any of the distributions for more information.
A