What is a Chi Square Test?

Watch the video for an overview of the tests:

There are two types of chi-square tests. Both use the chi-square statistic and distribution for different purposes:

What is a Chi-Square Statistic?

The formula for the chi-square statistic used in the chi square test is:

The subscript “c” is the degrees of freedom. “O” is your observed value and E is your expected value. It’s very rare that you’ll want to actually use this formula to find a critical chi-square value by hand. The summation symbol means that you’ll have to perform a calculation for every single data item in your data set. As you can probably imagine, the calculations can get very, very, lengthy and tedious. Instead, you’ll probably want to use technology:

A chi-square statistic is one way to show a relationship between two categorical variables. In statistics, there are two types of variables: numerical (countable) variables and non-numerical (categorical) variables. The chi-squared statistic is a single number that tells you how much difference exists between your observed counts and the counts you would expect if there were no relationship at all in the population.

There are a few variations on the chi-square statistic. Which one you use depends upon how you collected the data and which hypothesis is being tested. However, all of the variations use the same idea, which is that you are comparing your expected values with the values you actually collect. One of the most common forms can be used for contingency tables:

Where O is the observed value, E is the expected value and “i” is the “ith” position in the contingency table.

You could also use a p-value. First state the null hypothesis and the alternate hypothesis. Then generate a chi-square curve for your results along with a p-value (See: Calculate a chi-square p-value Excel). Small p-values (under 5%) usually indicate that a difference is significant (or “small enough”).

Tip: The Chi-square statistic can only be used on numbers. They can’t be used for percentages, proportions, means or similar statistical values. For example, if you have 10 percent of 200 people, you would need to convert that to a number (20) before you can run a test statistic.
Back to Top

A chi square test will give you a p-value. The p-value will tell you if your test results are significant or not. In order to perform a chi square test and get the p-value, you need two pieces of information:

In elementary statistics or AP statistics, both the degrees of freedom(df) and the alpha level are usually given to you in a question. You don’t normally have to figure out what they are. You may have to figure out the df yourself, but it’s pretty simple: count the categories and subtract 1.

A chi-bar-squared distribution is a mixture of chi-square distributions, mixed over their degrees of freedom. You’ll often find them when testing a hypothesis with an inequality.

The chi-squared distribution has many uses in statistics, including:

A similar distribution is the chi distribution [2]. This distribution describes the square root of a variable distributed according to a chi-square distribution.; with df = n > 0 degrees of freedom has a probability density function of:

For values where x is positive. 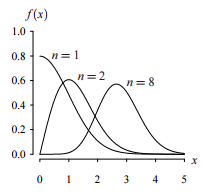 The cdf for this function does not have a closed form, but it can be approximated with a series of integrals, using calculus.

How to Calculate a Chi Square Statistic

A chi-square statistic is used for testing hypotheses. Watch this video, How to calculate a chi square.

The chi-square formula is a difficult formula to deal with. That’s mostly because you’re expected to add a large amount of numbers. The easiest way to solve the formula is by making a table. 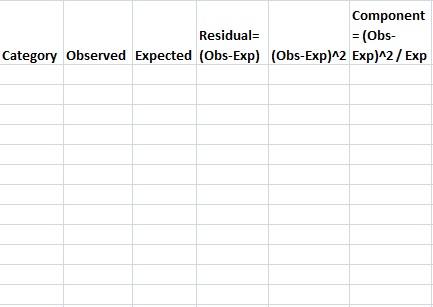 Step 2: Fill in your categories. Categories should be given to you in the question. There are 12 zodiac signs, so: 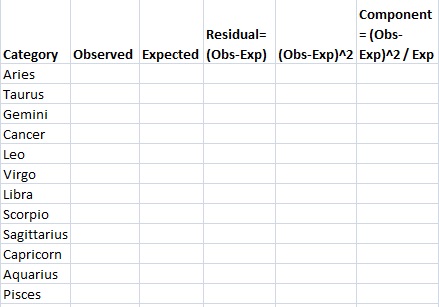 Step 3: Write your counts. Counts are the number of each items in each category in column 2. You’re given the counts in the question: 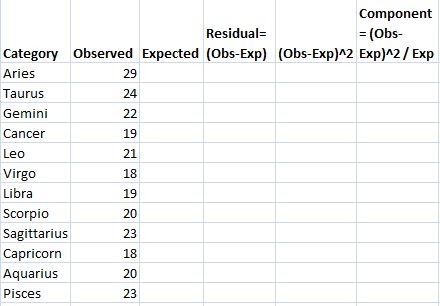 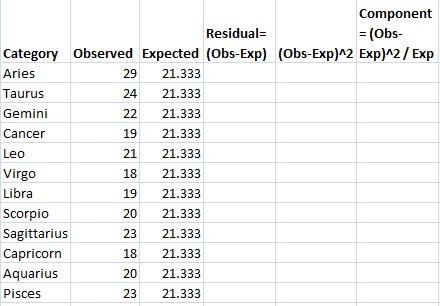 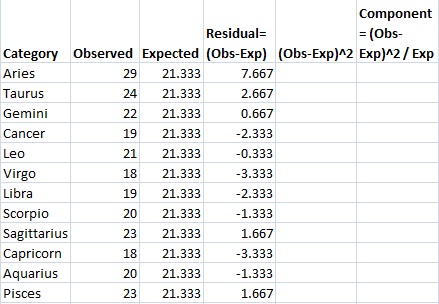 Step 6: Square your results from Step 5 and place the amounts in the (Obs-Exp)2 column. 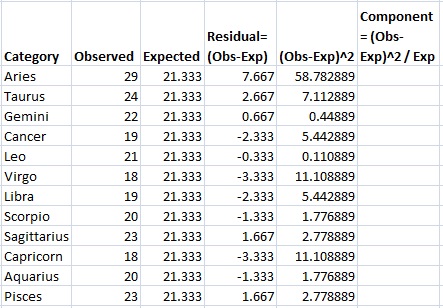 Step 7: Divide the amounts in Step 6 by the expected value (Step 4) and place those results in the final column. 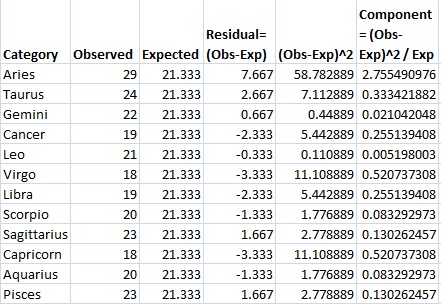 Step 8: Add up (sum) all the values in the last column. 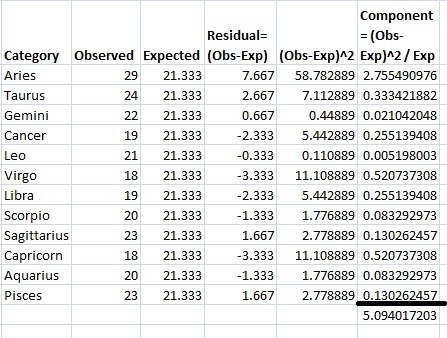 You’ll find the chi square test in SPSS under “Crosstabs”.

Note: In order to run a chi-square test in SPSS you should already have written a hypothesis statement. See: How to state the null hypothesis.


How to run a Chi Square Test in SPSS
Watch this video on YouTube.
Can’t see the video? Click here.

Step 2: Click the “Statistics” button. The statistics button is to the right of the Crosstabs window. A new pop up window will appear. 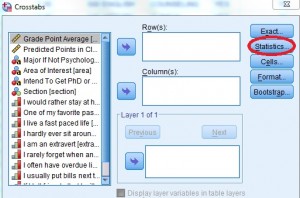 Step 3: Click “Chi Square” to place a check in the box and then click “Continue” to return to the Crosstabs window.

Step 4: Select the variables you want to run (in other words, choose two variables that you want to compare using the chi square test). Click one variable in the left window and then click the arrow at the top to move the variable into “Row(s).” Repeat to add a second variable to the “Column(s)” window.

Step 7: Compare the p-value returned in the chi-square area (listed in the Asymp Sig column) to your chosen alpha level.

Check out our YouTube channel for more help with stats. Find dozens of videos on basic stats principles plus how to calculate stats using Microsoft Excel.

How To Test a Chi Square Hypothesis (Test for Independence)

Watch the video for how to test a hypothesis with chi-square using the p-value method:

A chi-square test for independence shows how categorical variables are related. There are a few variations on the statistic; which one you use depends upon how you collected the data. It also depends on how your hypothesis is worded. All of the variations use the same idea; you are comparing the values you expect to get (expected values) with the values you actually collect (observed values). One of the most common forms can be used in a contingency table.

The chi square hypothesis test is appropriate if you have:

For example, you could have a clinical trial with blood sugar outcomes of hypoglycemic, normoglycemic, or hyperglycemic.

Sample question: Test the chi-square hypothesis with the following characteristics:

Note: Degrees of freedom equals the number of categories minus 1.