What is a Normal distribution?

Watch the video for an overview of the normal distribution:


Normal Distribution Definition and Properties
Watch this video on YouTube.
Can’t see the video? Click here.
A normal distribution, sometimes called the bell curve (or De Moivre distribution [1]), is a distribution that occurs naturally in many situations. For example, the bell curve is seen in tests like the SAT and GRE. The bulk of students will score the average (C), while smaller numbers of students will score a B or D. An even smaller percentage of students score an F or an A. This creates a distribution that resembles a bell (hence the nickname). The bell curve is symmetrical. Half of the data will fall to the left of the mean; half will fall to the right.
Many groups follow this type of pattern. That’s why it’s widely used in business, statistics and in government bodies like the FDA:

Properties of a normal distribution

The Standard Normal Model
A standard normal model is a normal distribution with a mean of 0 and a standard deviation of 1.

One way of figuring out how data are distributed is to plot them in a graph. If the data is evenly distributed, you may come up with a bell curve. A bell curve has a small percentage of the points on both tails and the bigger percentage on the inner part of the curve. In the standard normal model, about 5 percent of your data would fall into the “tails” (colored darker orange in the image below) and 90 percent will be in between. For example, for test scores of students, the normal distribution would show 2.5 percent of students getting very low scores and 2.5 percent getting very high scores. The rest will be in the middle; not too high or too low. The shape of the standard normal distribution looks like this:

The standard normal distribution could help you figure out which subject you are getting good grades in and which subjects you have to exert more effort into due to low scoring percentages. Once you get a score in one subject that is higher than your score in another subject, you might think that you are better in the subject where you got the higher score. This is not always true.

You can only say that you are better in a particular subject if you get a score with a certain number of standard deviations above the mean. The standard deviation tells you how tightly your data is clustered around the mean; It allows you to compare different distributions that have different types of data — including different means.

For example, if you get a score of 90 in Math and 95 in English, you might think that you are better in English than in Math. However, in Math, your score is 2 standard deviations above the mean. In English, it’s only one standard deviation above the mean. It tells you that in Math, your score is far higher than most of the students (your score falls into the tail).
Based on this data, you actually performed better in Math than in English!

Of course, not all problems are quite that simple, which is why there’s a z-table. All a z-table does is measure those probabilities (i.e. 50%) and put them in standard deviations from the mean. The mean is in the center of the standard normal distribution, and a probability of 50% equals zero standard deviations.

Step 1: Draw a bell curve and shade in the area that is asked for in the question. The example below shows z >-0.8. That means you are looking for the probability that z is greater than -0.8, so you need to draw a vertical line at -0.8 standard deviations from the mean and shade everything that’s greater than that number.

Step 2: Visit the normal probability area index and find a picture that looks like your graph. Follow the instructions on that page to find the z-value for the graph. The z-value is the probability.

Tip: Step 1 is technically optional, but it’s always a good idea to sketch a graph when you’re trying to answer probability word problems. That’s because most mistakes happen not because you can’t do the math or read a z-table, but because you subtract a z-score instead of adding (i.e. you imagine the probability under the curve in the wrong direction. A sketch helps you cement in your head exactly what you are looking for.

This video shows one example of a normal distribution word problem.

This how-to covers solving problems that contain the phrase “between” and includes an upper and lower limit (i.e. “find the number of houses priced between $50K and 200K”. Note that this is different from finding the “middle percentage” of something.

In addition, you will be given EITHER:

Step 2: Draw a graph. Put the mean you identified in Step 1 in the center. Put the number associated with “between” on the graph (take a guess at where the numbers would fall--it doesn’t have to be exact). For example, if your mean was $100, and you were asked for “hourly wages between $75 and $125”) your graph will look something like this:

Step 3:Figure out the z-scores. Plug the first X value (in my graph above, it’s 75) into the z value formula and solve. The μ (the mean), is 100 from the sample graph. You can get these figures (including σ, the standard deviation) from your answers in step 1 :

*Note: if the formula confuses you, all this formula is asking you to do is:

Step 5: Take the numbers from step 3 and 4 and use them to find the area in the z-table.

Convert the answer from step 5 into a percentage.

This how-to covers solving normal distribution problems that contain the phrase “more than” (or a phrase like “above”).

Step 1: Break up the word problem into parts. Find:

Step 2: Find the sample from the problem. You’ll have either a specific size (like “1000 televisions”) or a general sample (“Every television”).

Draw a picture if the problem with the mean and the area you are looking for. For example, if the mean is $15, and you were asked to find what dinners cost more than $10, your graph might look like this:

Step 3: Calculate the z-score (plug your values into the z value formula and solve). Use your answers from step 1 :

Basically, all you are doing with the formula is subtracting the mean from X and then dividing that answer by the standard deviation.

Step 4: Find the area using the z-score from step 3. Use the z-table. Not sure how to read a z-table? See the video on the z-table page.

Step 6: Go to Step 6a to find a probability OR go to step 6b to calculate a certain number or amount.

Step 6a
Turn step 5’s answer into a percentage.

This how-to covers solving normal distribution word problems that have the phrase “less than” (or a similar phrase such as “fewer than”).

Step 1: Break up the word problem into parts:

Plus, you will have EITHER:

Step 2: Draw a picture to help you visualize the problem. The following graph shows a mean of 15, and an area “under 4”): 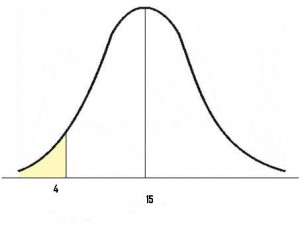 Step 3:  Find the z value by plugging the given values into the formula. The “X” in our sample graph is 4, and the μ (or mean) is 15. You can get these figures (including σ, the standard deviation) from your answers in step 1, where you identified the parts of the problem:

All you have to do to solve the formula is:

Step 4: Take the number from step 3, then use the z-table to find the area.

Change the number from step 5 into percentage.

Check out our YouTube channel for more worked problems.

In elementary statistics, you’ll often be faced with a question that asks you the cut off points for a certain percentage of the normal distribution, like the top 90% or the top 10%. While working out these types of problems by hand is cumbersome, the TI-89 graphing calculator makes light work of finding cut off points for a top percentage with the Inverse Normal function. What you’re actually doing is looking for the cut off points for a certain percentile: for example, if you have a list of grades and you want to know what score is at the 99th percentile, you can use the inverse normal function to find that percentage cut-off point.

1. Finding Cut Off Points For a Top Percentage

Sample problem: Students at a certain college average 5 feet 8 inches (68 inches) tall. The heights are normally distributed, with a standard deviation of 2.5 inches. What is the value that separates the top 1% of heights from the rest of the population?

Step 1: Press APPS and use the scroll keys to highlight Stats/List Editor.

Sample question: A group of students with normally distributed salaries earn an average of $6,800 with a standard deviation of $2,500. What proportion of students earn between $6,500 and $7,300?

Sample problem: Draw a normal distribution curve for student salaries during a typical semester. The student salaries have a mean of $6,800 and standard deviation of $2,500. Shade the area on the graph that corresponds to salaries between $7,300 and $9,000.

Step 8: Scroll down. Turn Auto Scale to “yes” by pressing the right scroll key, then the down scroll key to select yes. Press ENTER.

Tip: If you want to enter ∞ (infinity) as one of your lower or upper values, press the diamond key and then Catalog.

Watch the video for the steps. 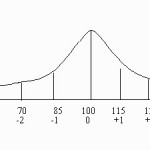 While it’s possible to look up probabilities for a normal distribution using the z-table, it’s much easier to calculate probabilities in Excel for a couple of reasons. First, there’s no looking at a table; the NORMDIST function does the hard work for you. Second, Excel does the intermediate calculations for you. Most calculation errors happen in an intermediate step (such as calculating the z-score to look up) rather than the actual z-score itself. Excel can handle three types of probability calculations: more than, less than, and in between. These instructions work for Excel 2007 and Excel 2010.

Sample Question: Suppose that a contaminant in samples from a city’s water supply has a mean of 500 ppm and a standard deviation of 100 ppm. What is the probability that bacteria in a randomly selected water sample will be: 1/ less than 600 ppm 2/More than 600 ppm 3/between 400 and 600 ppm?

Step 3: Type “Normdist” into the search box and then click “Go.”

Watch the video for instructions on how to create a bell curve in Excel:


How to graph a standard normal distribution in Excel
Watch this video on YouTube.
Can’t see the video? Click here.

The normal distribution is formally defined by the probability density function: