What is the Tukey Lambda Distribution? 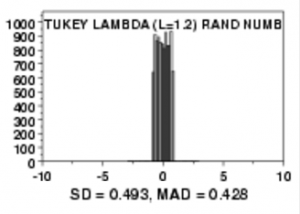 The Tukey Lambda Distribution is a family of symmetric distributions with truncated (cut off) tails.

The distribution is defined numerically with three parameters:

The following image shows two vastly different shapes for λ values of 0.5 and 5.0:

So although there isn’t one general PDF for all possible values of λ, a PDF can easily be generated for specific values once you know the percentile function.

GLD and the Percentile Function

The generalized lambda distribution is usually defined in terms of its four-parameter percentile function:

Not surprisingly, the Tukey Lambda isn’t used for statistical modeling due to the lack of an easily definable PDF or CDF. It’s main use is to approximate other symmetric probability distributions such as:

It is also an exact match for some distributions, including:

Tukey’s lambda distribution was first proposed by John Tukey in 1960 (although it was based on 1947 work by Hastings et. al). In the early 1970s the distribution was generalized by John Ramberg and Bruce Schmeiser for use in Monte Carlo simulations; Ramberg and colleagues went on to develop the curve-fitting< properties of the distribution in the late 70's. After you have fit the curve, you can then model the residuals from that curve. Curve fitting algorithms include: gradient descent, Gauss-Newton and the Levenberg–Marquardt algorithm.

One of the more common uses for the Tukey-Lambda distribution is in PPCC plot generation. A Tukey-Lambda PPCC plot (Probability Plot Correlation Coefficient Plot) is generated by software and is based on a set of inputted data. The plot results in a suggested model for the data.