The Kumaraswamy distribution is a two-variable family of distributions that is bounded at one and zero. It is flexible and can be used to model a variety of shapes, and its probability density function and cumulative distribution function can be written in very simple terms.

Comparison of the Kumaraswamy distribution the Beta Distribution 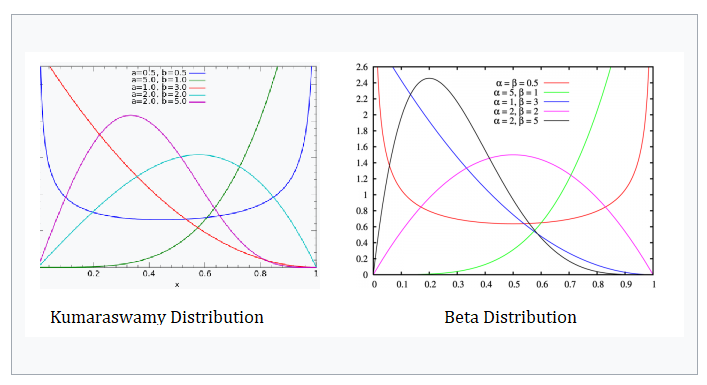 PDFs for the two distributions have the same basic shape.

Unlike the beta, the Kumaraswamy distribution’s CDF doesn’t contain the incomplete Beta function, which makes it much easier to work with (Michalowicz et al., 2013). The PDF and quantile functions also have a closed form, making the Kumaraswamy distribution a more practical choice for many applications—especially simulation studies. Other notable advantages over the beta include explicit formula for moments of order statistics and a simple formula for generation of random variables (Ishaq et al., 2019).

PDF for the Kumaraswamy distribution

In this equation a and b are non-negative shape parameters.