What is the Erlang Distribution?

The Erlang distribution (sometimes called the Erlang-k distribution) was developed by A.K. Erlang to find the number of phone calls which can be made simultaneously to switching station operators. Erlang was a telecommunications engineer for the Copehagen Telephone Company; his formulas for loss and waiting time were used by many telephone companies, including the British Post Office. Erlang’s distribution has since been expanded for use in queuing theory, the mathematical study of waiting in lines. It is also used in stochastic processes and in mathematical biology.

The Erlang distribution is a specific case of the Gamma distribution. It is defined by two parameters, k and &u, where: 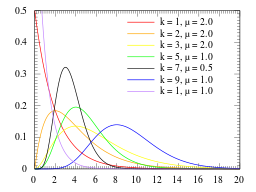 The factorial(!) in the denominator is the reason why the distribution is only defined for positive numbers. An equivalent form of the pdf for this distribution includes λ, a measure of rate, which is related to μ in the following way:
μ = 1/λ.
λ represents the number of items or calls expected in a given amount of time.

Statistics of the Erlang Distribution

Relationship to Other Distributions