What is the Von Mises Distribution?

The distribution was first described by Richard von Mises in 1918 as a way to model the distribution of atomic weights. It’s now used to model a variety of phenomena including: 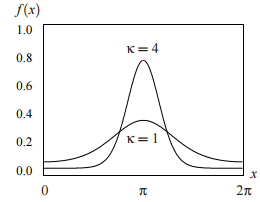 The general form of the Von Mises PDF is:

The median and mean of X is zero.
The following are mathematically intractable (difficult or near-impossible to solve for):