A U-Shaped distribution is a bimodal distribution with frequencies that steadily fall and then steadily rise. There is a higher chance of a measurement being found at the extremes than in the center of the distribution. Cyclical and sinusoidal measurements are usually in distributed in U-shapes (Bucher, 2012). 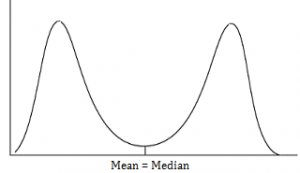 In some ways, this distribution can be thought of as an upside down bell curve. However, a U-shaped distribution can’t be turned into a bell curve by a meaningful transformation, even if it is perfectly symmetric (Iversen & Norpoth, 1987).

A symmetric U-shaped distribution has the following characteristics:

U-shaped distributions have been noted for more than a hundred years. Pearson (1895) stated that U-shaped curves, because of the prevalence of extremes, may appear in meteorological phenomena and competitive exams, where “…the mediocre have occasionally sufficient wisdom to refrain from entering.”