The Yule-Simon distribution (or Yule distribution) is a highly skewed discrete probability distribution named after George Udny Yule and Herbert A. Simon—winner of the 1978 Nobel Prize in economics.

PMF for the Yule-Simon distribution

The Yule-Simon is one of the few distributions where x cannot be less than 1.

CDF for the Yule-Simon Distribution 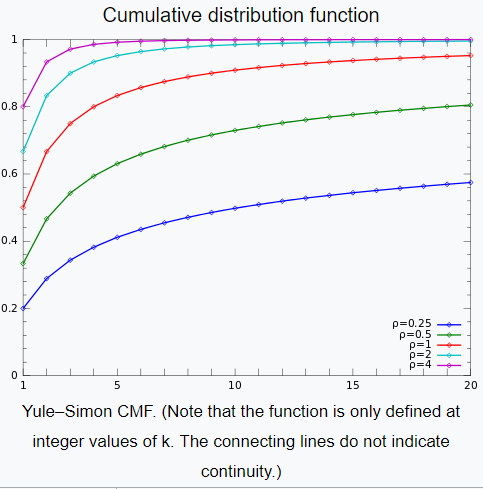 The CDF for the Yule-Simon distribution is:

The Yule-Simon distribution is used to model a wide variety of phenomena, including the “superstar phenomenon“, where a small number of people dominate their particular field and earn the lion’s share of the money. The term cumulative advantage has also been used to describe this phenomenon. Let’s say Tom Cruise and John Doe vie for a lead role in a movie; the obvious choice would be Tom Cruise because he’s well known. Tom Cruise would earn a lot more than John Doe (Exponentially more), because he’s well known. And Tom Cruise would receive more phone calls, more offers to make paid appearances, and should he write an autobiography—he would probably get millions for it. Essentially, he has a cumulative advantage over John Doe, who would struggle to get noticed (or paid), even if his abilities were on the same par as Tom Cruise.