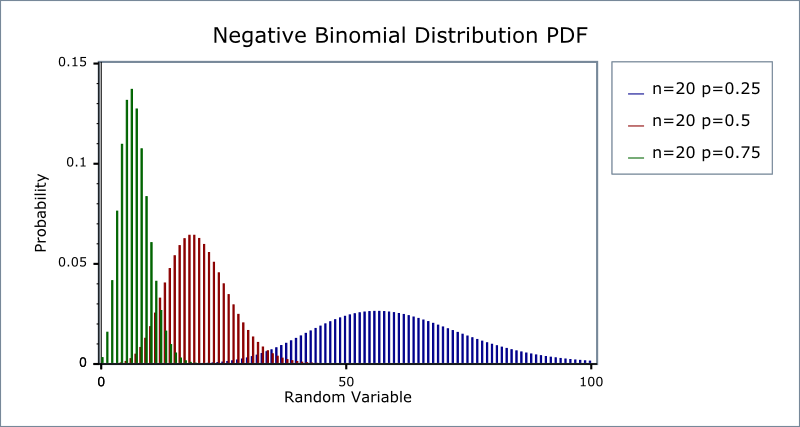 If the following five conditions are true the experiment is binomial:

Example: Take a standard deck of cards, shuffle them, and choose a card. Replace the card and repeat twenty times. Y is the number of aces you draw.

The negative binomial is similar to the binomial with two differences (specifically to numbers 1 and 5 in the list above):

Example: Take a standard deck of cards, shuffle them, and choose a card. Replace the card and repeat until you have drawn two aces. Y is the number of draws needed to draw two aces. As the number of trials isn’t fixed (i.e. you stop when you draw the second ace), this makes it a negative binomial distribution.

What is a Negative Binomial Distribution?

Why is it called Negative Binomial?

When you hear the term negative, you might think that a positive distribution is flipped over the x-axis, making it negative. However, the “negative” part of negative binomial actually stems from the fact that one facet of the binomial distribution is reversed: in a binomial experiment, you count the number of Successes in a fixed number of trials; in the above example, you’re counting how many aces you draw. In a negative binomial experiment, you’re counting the Failures, or how many cards it takes you to pick two aces.

Mean:
μ = r / P
where r is the number of trials
P=probability of success for any trial

The pmf for the negative binomial distribution is:

Where:
r is the number of successes and
p = the probability of success.

Step 2: Insert those values from Step 1 into the formula: