What is an Exponential distribution? 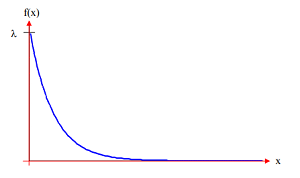 PDF of the exponential distribution.

What is a Poisson Process?

The Poisson process gives you a way to find probabilities for random points in time for a process. A “process” could be almost anything:

The Poisson process can tell you when one of these random points in time will likely happen. For example, when customers will arrive at a store, or when a battery might need to be replaced. It’s basically a counting process; it counts the number of times an event has occurred since a given point in time, like 1210 customers since 1 p.m., or 543 files since noon. An assumption for the process is that it is only used for independent events.

Let’s say a store is interested in the number of customers per hour. Arrivals per hour has a Poisson 120 arrival rate, which means that 120 customers arrive per hour. This could also be worded as “The expected mean inter-arrival time is 0.5 minutes”, because a customer can be expected every half minute — 30 seconds.

What is the Exponential Distribution used for?

If you assume that the answer to these questions is unknown, you can think of the elapsed time as a random variable with an exponential distribution as long as the events occur continuously and independently at a constant rate. 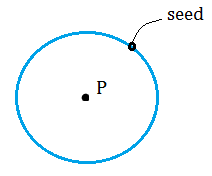 The exponential distribution can model area, as well as time, between events.

Young and Young (198) give an example of how the exponential distribution can also model space between events (instead of time between events). Say that grass seeds are randomly dispersed over a field; Each point in the field has an equal chance of a seed landing there. Now select a point P, then measure the distance to the nearest seed. This distance becomes the radius for a circle with point P at the center. The circle’s area has an exponential distribution.

This distribution has a memoryless property, which means it “forgets” what has come before it. In other words, if you continue to wait, the length of time you wait neither increases nor decreases the probability of an event happening. Any time may be marked down as time zero. Let’s say a hurricane hits your island. The probability of another hurricane hitting in one week, one month, or ten years from that point are all equal. The exponential is the only distribution with the memoryless property.

While many authors consider the memoryless property to be one of the most useful aspects of the distribution, it’s also the reason why it may not make sense for modeling certain situations. For example, let’s say you wanted to model deaths of family dogs. Because of the memoryless property, the probability of a pet dog dying at age 1 would be the same as the dog dying at age 15, which is obviously nonsensical. Therefore, you should think about whether the exponential makes sense logically to your particular area of interest. For lifetime studies, the exponential is usually used only as a first rough model for the process. 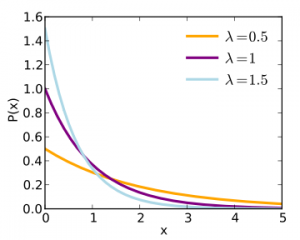 The exponential distribution. λ is the rate parameter.

An alternate form of the pdf (Engineering Statistics Handbook) is: 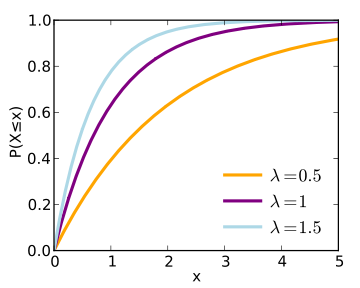 Plot of the CDFs of several exponential distributions.

Connection to Other Distributions

Using this definition, some natural events can fit the model. For example, the number of hurricanes that hit Hawaii each year is a Poisson distribution. However, figuring out when a machine might fail is not (as the event can only happen once).

The exponential is a special case of the gamma distribution (Balakrishnan, 1996). It is the continuous counterpart of the geometric distribution, which models time between successes in a series of independent trials.

This vast variety of distributions are connected in that they all have the following general form for their density (relative to their parameter vector, η):