What is a Beta Distribution?

A Beta distribution is a versatile way to represent outcomes for percentages or proportions. For example, how likely is it that a rogue candidate will win the next Presidential election? You might think the probability is 0.2. Your friend might think it’s 0.15. The beta distribution gives you a way to describe this.

One reason that this function is confusing is there are three “Betas” to contend with, and they all have different meanings:

The general formula for the probability density function is:

where:
α and β are two positive shape parameters which control the shape of the distribution. 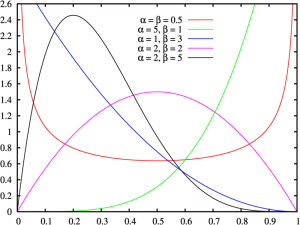 Most software packages have options for the beta distribution.

Watch the video for an example of BETA.DIST:


The Microsoft Excel beta distribution format depends on which version of Excel you are using; Excel 2010 and later uses the BETA.DIST function, while earlier versions use BETADIST. You’ll need to know alpha and beta, both of which refer to the parameters describing the distribution. Five inputs are needed:

An extra input is needed for the Excel 2010 Beta Distribution: cumulative. Cumulative is a logical value that determines the function’s form and can either be TRUE (returns the cumulative distribution function) or FALSE (returns the probability density function).

Example problem: Calculate a cumulative distribution function for a beta distribution in Excel at 0.5 with an alpha of 9, a beta of 10, a lower bound of 0 and an upper bound of 1.

Step 1: Type the value where you want to evaluate the function in cell A1. For this example, type “.5” in cell A1. 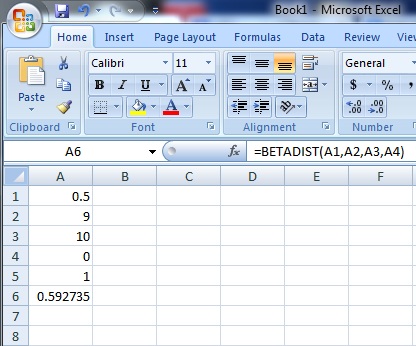 The Beta distribution is an excellent way to represent outcomes like probabilities or proportions.

The probability function P(x) and distribution function D(x) for the Beta Distribution are:

Applications of the Beta Density Function

The beta distribution is used for many applications, including Bayesian hypothesis testing, the Rule of Succession (a famous example being Pierre-Simon Laplace’s treatment of the sunrise problem), and Task duration modeling. The beta distribution is especially suited to project/planning control systems like PERT and CPM because the function is constrained by an interval with a minimum (0) and maximum (1) value.