This distribution has many applications in applied mathematics, in part because of its simplicity. For example, sums of random variables need to be calculated in problems dealing with:

PDF of the Irwin-Hall Distribution

The probability density function (PDF) of the Irwin-Hall distribution is given by (Florescu, 2014): 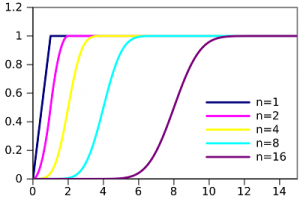 PDF for various values of n for the Irwin-Hall distribution. Image: Thomasda|Wikimedia Commons.

Batsyn, M. & Kalyagin, V. (2012). An Analytical Expression for the Distribution of the Sum of Random Variables with a Mixed Uniform Density and Mass Function.
Florescu, I. (2014). Probability and Stochastic Processes 1st Edition. Wiley.
Flury, B. A First Course in Multivariate Statistics (Springer Texts in Statistics) 1997 Edition.
Hall, P. (1927). The distribution of means for samples of size n drawn from a population in which
the variate takes values between 0 and 1, all such values being equally probable. Biometrika,
Vol. 19, No. 3/4. pp. 240–245.Irwin J.(1927). On the frequency distribution of the means of samples from a population having any law of frequency with finite moments, with special reference to Pearson’s type II.
Biometrika, Vol. 19, No. 3/4. pp. 225–239.
Marengo, J et al. (2017). A Geometric Derivation of the Irwin-Hall Distribution. International Journal of Mathematics and Mathematical Sciences.