What is a Folded Normal Distribution? 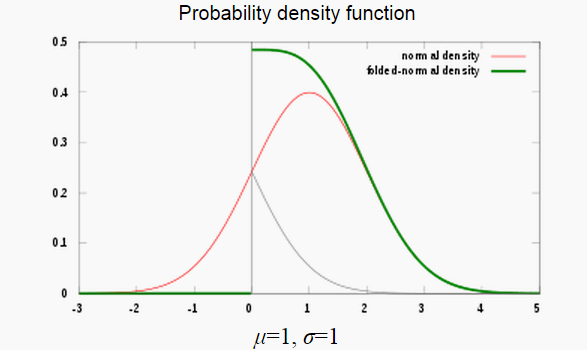 The mean( μ) and variance (σ2) of X in the original normal distribution becomes the location parameter (μ) and scale parameter (σ) of Y in the folded distribution. A more formal definition uses these two facts:

When μ = 0, and the scale parameter (σ) is 1, it is a special case of the distribution of Y called a half-normal distribution. In this distribution, x-values will always be greater or equal to zero (with a maximum value of infinity). This is one of the most important variations of the folded normal, because you’re more likely to be interested in normal distributions with a mean of 0 (i.e. a standard normal). For example, the half-normal distribution models Brownian motion — the random movement of microscopic particles suspended in a liquid or gas.