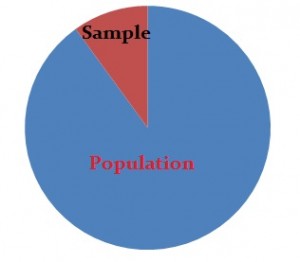 Samples are parts of a population. For example, you might have a list of information on 100 people (your “sample”) out of 10,000 people (the “population”). You can use that list to make some assumptions about the entire population’s behavior.

Watch the video for an overview of different sampling methods:

However, it’s not that simple. When you do stats, your sample size has to be ideal—not too large or too small. Then once you’ve decided on a sample size, you must use a sound technique to collect the sample from the population:

The most common techniques you’ll likely meet in elementary statistics or AP statistics include taking a sample with and without replacement. Specific techniques include:

You’ll probably not come across these in a basic stats class.

Different Sampling Methods: How to Tell the Difference

Different Sampling Methods: How to Tell the Difference: Steps

Step 1: Find out if the study sampled from individuals (for example, picked from a pool of people). You’ll find simple random sampling in a school lottery, where individual names are picked out of a hat. But a more “systematic” way of choosing people can be found in “systematic sampling,” where every nth individual is chosen from a population. For example, every 100th customer at a certain store might receive a “doorbuster” gift.

Step 2: Find out if the study picked groups of participants. For large numbers of people (like the number of potential draftees in the Vietnam war), it’s much simpler to pick people by groups (simple random sampling). In the case of the draft, draftees were chosen by birth date, “simplifying” the procedure.

Step 3: Determine if your study contained data from more than one carefully defined group (“strata” or “cluster”). Some examples of strata could be: Democrats and Republics, Renters and Homeowners, Country Folk vs. City Dwellers, Jacksonville Jaguars fans and San Francisco 49ers fans. If there are two or more very distinct, clear groups, you have a stratified sample or a “cluster sample.”

Step 4: Find out if the sample was easy to get. Convenience samples are like convenience stores: why go out of your way to get samples, when you can nip out to the corner store? A classic example of convenience sampling is standing at a shopping mall, asking passers by for their opinion.

What is Sampling Error?

If you were to survey the entire population (like the US Census), there would be no error. It’s nearly impossible to calculate the error margin. However, when you take samples at random, you estimate the error and call it the margin of error.

Sample error can only be reduced, this is because it is considered to be an acceptable tradeoff to avoid measuring the entire population. In general, the larger the sample, the smaller the margin of error. There is a notable exception: if you use cluster sampling, this may increase the error because of the similarities between cluster members. A carefully designed experiment or survey can also reduce error.

Another Type of Error

The non-sampling error could be one reason as to why there’s a difference between the sample and the population. This is due to poor data collection methods (like faulty instruments or inaccurate data recording), selection bias, non response bias (where individuals don’t want to or can’t respond to a survey), or other mistakes in collecting the data. Increasing the sample size will not reduce these errors. They key is to avoid making the errors in the first place with a well-planned design for the survey or experiment.

Check out our YouTube channel for more stats tips and help!