You may want to read this article first: What is a logarithm?

What is a Lognormal Distribution?

The probability density function is defined by the mean μ and standard deviation, σ:

The shape of the lognormal distribution is defined by three parameters: 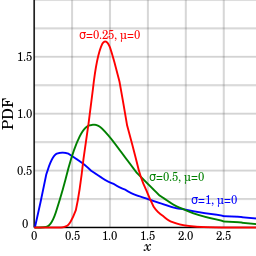 When are Lognormal Distributions Used?

The most commonly used (and the most familiar) distribution in science is the normal distribution. The familiar “bell curve” models many natural phenomenon, from the simple (weights or heights) to the more complex. For example, the following phenomenon can all be modeled with a lognormal distribution:

Many more phenomenon can be modeled with the lognormal distribution, such as the length of latent periods of infectious disease or species abundance1.

Other Names for the Lognormal

Historically, the lognormal distribution has been called many names, including:

Check out our YouTube channel for hundreds of probability and statistics help videos!