What is an Extreme Value Distribution?

An extreme value distribution is a limiting model for the maximums and minimums of a data set. It models how large (or small) your data will probably get. For example, let’s say you wanted to build a levee to protect against storm surges. You can use historical storm data to create a limiting distribution that tells you how large the waves are likely to get and when the levee is probably going to fail. It may be helpful to think of the limit as a failure point — a point that, if exceeded, some kind of failure or end-of-life event will happen.

The basic idea is that three types of extreme value distributions (EVD Types I,II, and II) can model the extremes from any set of data, as long as the distribution is “well-behaved” (Gumbel, 1958), with the following characteristics: 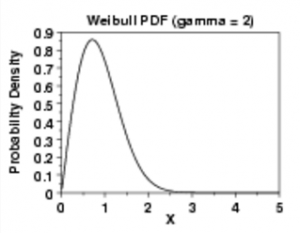 The Weibull distribution is one way to model extreme values.

If you generate any number of datasets, take the minimums and maximums from those sets, and generate a new distribution, it will follow one of three model types: no upper or lower limits (EVD I), bounded on the lower end (EVD II), or bounded on the upper end (EVD Type III) (Haan, 1977).

The Generalized Extreme Value (GEV) distribution is a three-parameter distribution that unites the Type I (Gumbel), Type II (Fréchet) and Type III (Weibull) extreme value distributions. Which of the three models you choose depends upon the behavior in the tail of the parent distribution. However, you usually don’t know the behavior of the parent population’s tail (Holmes, 2015). If you don’t know anything about the tail behavior, then it’s impossible to choose which model might be the “best”. The GEV solves this problem by combining all three distributions into a single general form.

The CDF for the GEV is:

σ and 1 + ξ(x-μ)/σ must be greater than zero. ξ and μ can take on any real value.
The shape parameter defines which distribution the generalized extreme value distribution takes on:

What is the Largest Extreme Value Distribution?

What is an “Extreme Value?”

Extreme values are found in the tails of a probability distribution (highlighted yellow in the image).

The term “extreme value” can mean something slightly different depending on where you read about it. Some authors use the term “extreme value” as another name for the minimum value and/or the maximum value of a function (i.e. the single smallest and/or largest number in the set), and others use as a synonym for an outlier. In calculus, the points where you find maximum and minimum values are called extrema, so some authors will refer to these points as “extreme values” as well. However, in most cases, when people talk about extreme values, they’re usually talking about values associated with the Extreme Value Theory.

What is the Extreme Value Theory?

Extreme Value Theory (EVT) is a branch of statistics dealing with stochastic behavior of extreme events found in the tails of probability distributions. A stochastic model represents a situation where uncertainty is present. In other words, it’s a model for a process that has some kind of randomness. EVT aims to predict probabilities for rare events greater (or smaller) than previous recorded events. For example, EVT might be used in seismology to predict the next mega-earthquake in California, the last of which was in 1857.

EVT originated from astronomy and the need to keep or reject outliers in data (Kotz & Nadarajah, 2003). Outliers are stragglers — extremely high or extremely low values — in a data set that can throw off your stats. For example, if you were measuring children’s nose length, your average value might be thrown off if Pinocchio was in the class. EVT has developed into a theory that is applicable to almost every area of science and business. For example, the theory can model and predict a diverse range of phenomena such as the maximum heights of ocean waves or the strength of financial markets (Coles, 2013). The theory, which uses extreme value distributions, is widely used in economics, finance, materials science, reliability engineering and many other fields.