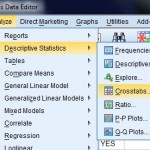 IBM SPSS Statistics is a software package that is geared towards the social sciences like federal and local governments and health care organizations. The software works similarly to Microsoft Excel, with a spreadsheet style entry field and easy-to-use toolbar. However, data entry in SPSS statistics is somewhat different, with columns used for variables.

Watch the video for an intro to SPSS, including navigating the variable view screen:

This SPSS tutorial for beginners collection gives you the basic tools to get you started with SPSS in a step-by-step format. You’ll find an introduction to the topic, videos and pictures to illustrate the points.

The program, originally called Statistical Package for the Social Sciences, was released in 1968 and quickly became one of the most widely used statistics programs in the social sciences, including in healthcare, government, market research and surveying. 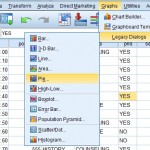 SPSS Pie charts are found in the legacy dialogs section of the toolbar.

Both Excel and SPSS have a similar feel, with pull-down menus, a host of built-in statistical functions and a spreadsheet format for easy data entry. However, SPSS is specifically built for statistics and surpasses Excel in many ways, including:

There are several disadvantages to using SPSS—especially for the casual learner—including the hefty price tag (at time of writing, a full version of IBM Statistics SPSS Standard costs over 5K!). Therefore, unless you are attached to a university or other organization that has already purchased a multi-user license, you’re unlikely to find the program on a personal computer.

Check out our Youtube channel for a full range of SPSS tutorial videos.