What is an Interquartile Range?

The interquartile range formula is the first quartile subtracted from the third quartile:

Watch the video for how to calculate the interquartile range by hand:

Solve the formula by hand.

What if I Have an Even Set of Numbers?

Find an interquartile range for an odd set of numbers: Alternate Method

Box Plot interquartile range: How to find it

Watch the video for the steps.

Box Plot interquartile range: How to find it

Example question: Find the interquartile range for the above box plot.

Watch the video for step-by-step directions: 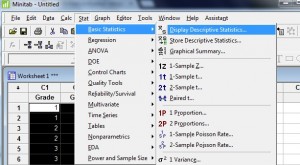 Step 3: Click a variable name in the left window and then click the “Select” button to transfer the variable name to the right-hand window. 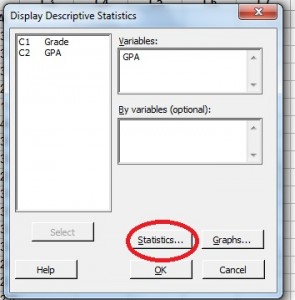 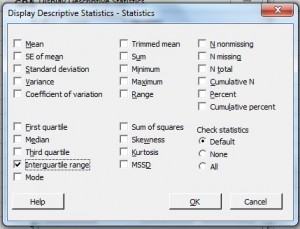 Step 6: Click the “OK” button (a new window will open with the result). The IQR for the GPA in this particular data set is 1.8. 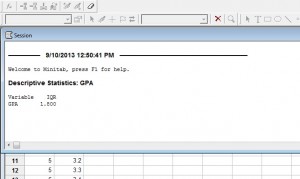 How to Find an Interquartile Range Excel 2007

Watch the video or read the steps below to find an interquartile range in Excel 2007: 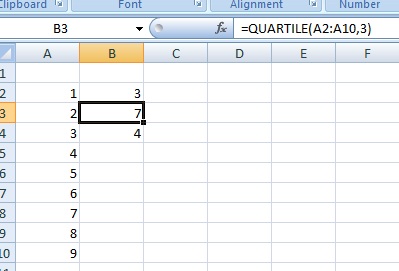 Steps:
Step 1: Enter your data into a single Excel column on a worksheet. For example, type your data in cells A2 to A10. Don’t leave any gaps in your data.

Step 4: Click a third blank cell (for example, click cell B4) and then type =B3-B2. If your quartile functions from Step 2 and 3 are in different locations, change the cell references.

Step 5: Press the “Enter” key. Excel will return the IQR in the cell you clicked in Step 4

How to Find an Interquartile Range in SPSS

Like most technology, SPSS has several ways that you can calculate the IQR. However, if you click on the most intuitive way you would expect to find it (“Descriptive Statistics > Frequencies”), the surprise is that it won’t list the IQR (although it will list the first, second and third quartiles). You could take this route and then subtract the third quartile from the first to get the IQR. However, the easiest way to find the interquartile range in SPSS by using the “Explore” command. If you have already typed data into your worksheet, skip to Step 3.

Step 2: Type your data into columns in the worksheet. You can use as many columns as you need, but don’t leave blank rows or spaces between your data. See: How to Enter Data into SPSS.

Step 4: Click the variable name (that’s just a fancy name for the column heading), then click the top arrow to move the variable into the “Dependent list” box. 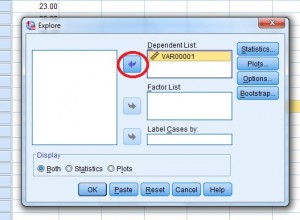 Step 5: Click “OK.” The interquartile range is listed in the Descriptives box. 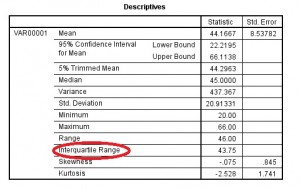 Tip: This example has only one list typed into the data sheet, but you may have several to choose from depending on how you entered your data. Make sure you select the right variable (column names) before proceeding. If you want more memorable variable names, change the column title by clicking the “variable view” button at the very bottom left of the worksheet. Type in your new variable name and then return to data view by clicking the “data view” button.
Back to Top

What is an Interquartile Range?

Imagine all the data in a set as points on a number line. For example, if you have 3, 7 and 28 in your set of data, imagine them as points on a number line that is centered on 0 but stretches both infinitely below zero and infinitely above zero. Once plotted on that number line, the smallest data point and the biggest data point in the set of data create the boundaries (i.e. a lower bound and an upper bound) of an interval of space on the number line that contains all data points in the set. The interquartile range (IQR) is the length of the middle 50% of that interval of space.

The interquartile range is the middle 50% of a data set. Box and whiskers image by Jhguch at en.wikipedia

If you want to know that the IQR is in formal terms, the IQR is calculated as: The difference between the third or upper quartile and the first or lower quartile. Quartile is a term used to describe how to divide the set of data into four equal portions (think quarter).

If you have a set containing the data points 1, 3, 5, 7, 8, 10, 11 and 13, the first quartile is 4, the second quartile is 7.5 and the third quartile is 10.5. Draw these points on a number line and you’ll see that those three numbers divide the number line in quarters from 1 to 13. As such, the IQR of that data set is 6.5, calculated as 10.5 minus 4. The first and third quartiles are also sometimes called the 25th and 75th percentiles because those are the equivalent figures when the data set is divided into percents rather than quarters.

While you can use the nifty online interquartile range calculator on this website, that might not be an option in a quiz or test. Most instructors allow the use of a TI-83 on tests, and it’s even one of the few calculators allowed in the AP Statistics exam. Finding the TI 83 interquartile range involves nothing more than entering your data list and pushing a couple of buttons.

Step 3: Press the right arrow button (the arrow keys are located at the top right of the keypad) to select “Calc.”

Step 5: Press ENTER again to bring up a list of stats.

Step 6:Scroll down the list with the arrow keys to find Q1 and Q3. Write those numbers down. You could copy and paste the numbers but unfortunately, Texas Instruments doesn’t make this easy:

The copy and paste menu should appear, enabling you to copy and paste the data. You would have to do this twice (returning to the HOME screen each time), so it’s much faster just to write the numbers down.

How to Find Q1, Q3 and the Interquartile Range TI 89

Step 1: Press APPS. Scroll to Stats/List Editor (use the arrow keys on the keypad to scroll). Press ENTER. If you don’t have the stats/list editor you can download it here.

Step 6: Tell the calculator you want stats for the list called “IQ” by entering ALPHA 9 ALPHA 1 into the “List:” box. The calculator should automatically put the cursor there for you. Press ENTER twice.

What is The Interquartile Range Formula?

Where Q3 is the upper quartile and Q1 is the lower quartile.

IQR as a test for normal distribution

What is an Interquartile Range Used For?

Where Does the term Interquartile Range Come From?

Who invented the term “Interquartile Range?” In order to find that out, we have to go back to the 19th century.

British physician Sir Donald MacAlister used the terms lower quartile and higher quartile in the 1879 publication, the Law of the Geometric Mean. Proc. R. Soc. XXIX, p. 374: ” “As these two measures, with the mean, divide the curve of facility into four equal parts, I propose to call them the ‘higher quartile’ and the ‘lower quartile’ respectively.” 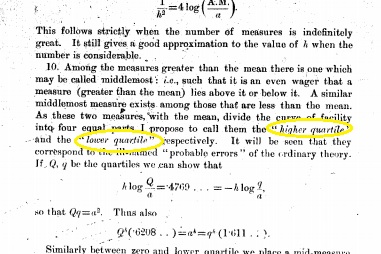 Although a physician by trade, he was gifted with mathematics and achieved the highest score in the final mathematics exams at Cambridge University in 1877. He spoke nineteen languages including English, Czech and Swedish.

Macalister’s paper, the Law of the Geometric Mean was actually in response to a question put forward by Francis Galton (inventor of the Galton board). However, it wasn’t until 1882 that Galton (“Report of the Anthropometric Committee”) used the upper quartile and lower quartile values and the term “interquartile range” —defined as twice the probable error. Galton wasn’t just a statistician—he was also an anthropologist, geographer, proto-genetecist and psychometrician who produced more than 340 books. He also coined the statistical terms “correlation” and “regression toward the mean.”