Contingency tables (also called crosstabs or two-way tables) summarize the relationship between several categorical variables. It is a special type of frequency distribution table, where two variables are shown simultaneously.

The following contingency table shows exposure to a potential source of foodborne illness (in this case, ice-cream). From the table, you can see that 13 people in a case study ate ice cream; 17 people did not:


In the above image, there’s an Odds Ratio calculation.

A chi2 test can be conducted on contingency tables to test whether or not a relationship exists between variables. These effects are defined as relationships between rows and columns. The chi2 test:

Where “O” is the Observed value, “E” is the expected value and “i” is the “ith” position in the table. The sigma (Σ) is the summation symbol. The following picture shows what your contingency table might look like with your data, plus the results from running a chi2 test on your data. A small chi2 value means that there is little relationship between the categorical variables. A large chi2 value means that there is a definite correlation between the two variables. As there is strong evidence that sexual orientation is linked to a higher risk of contracting AIDS, it’s no surprise that the chi2 value is high: 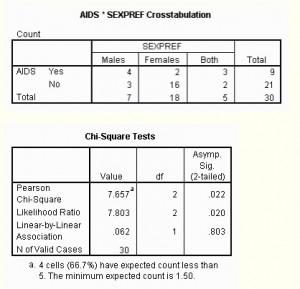 However, the note under the results states that “4 cells (66.7%) have expected count less than 5.” Generally, if this is over 25%, the result could be due to chance alone. Therefore, the results from this particular test are not statistically significant.

A contingency table in Excel is created in Excel with the Pivot Table tool. Watch this video on how to create one in Excel:


How to Make a Pivot Table in Excel (in 5 minutes!)
Watch this video on YouTube.
Can’t see the video? Click here.


Contingency tables are notoriously labor-intensive to produce and involve computing the expected frequency for each cell. The procedure is further complicated by the fact that you may have to make a correction for continuity if the expected cell frequency is below 5 (the correction for continuity for 2 x 2 tables is called the Yates correction). Many popular programs have the capability to make contingency tables, including Microsoft Excel (note that even in Excel, the process is quite complicated, involving the creation of pivot tables).

Agresti, A. An Introduction to Categorical Data Analysis (Wiley Series in Probability and Statistics) 3rd Edition, 2018.