What is the Kolmogorov-Smirnov Test?

The Kolmogorov-Smirnov Goodness of Fit Test (K-S test) compares your data with a known distribution and lets you know if they have the same distribution. Although the test is nonparametric — it doesn’t assume any particular underlying distribution — it is commonly used as a test for normality to see if your data is normally distributed.It’s also used to check the assumption of normality in Analysis of Variance.

Lilliefors test, a corrected version of the K-S test for normality, generally gives a more accurate approximation of the test statistic’s distribution. In fact, many statistical packages (like SPSS) combine the two tests as a “Lilliefors corrected” K-S test.

Note: If you’ve never compared an experimental distribution to a hypothetical distribution before, you may want to read the empirical distribution article first. It’s a short article, and includes an example where you compare two data sets simply— using a scatter plot instead of a hypothesis test.
Back to top

How to run the test by hand

Need help with the steps? Check out our tutoring page!

The hypotheses for the test are:

The general steps to run the test are:

The K-S test statistic measures the largest distance between the EDF Fdata(x) and the theoretical function F0(x), measured in a vertical direction (Kolmogorov as cited in Stephens 1992). The test statistic is given by:

Where (for a two-tailed test):

For a one-tailed test, omit the absolute values from the formula.

If D is greater than the critical value, the null hypothesis is rejected. Critical values for D are found in the K-S Test P-Value Table.

Step 1: Find the EDF. In the EDF article, I generated an EDF using Excel that I’ll use for this example.

Step 2: Specify the parent distribution. In the same article, I also calculated the corresponding values for the gamma function.

Step 3: Graph the functions together. A snapshot of the scatter graph looked like this: 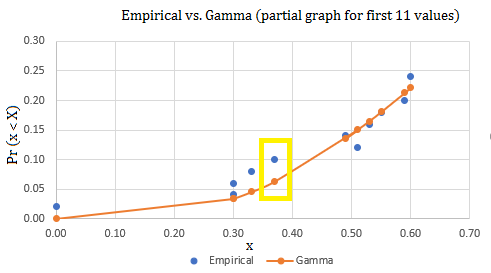 Largest vertical distance for this graph is highlighted by the yellow box.

Step 6: Compare the results from Step 4 and Step 5. Since .04 is less than .190, the null hypothesis (that the distributions are the same) is accepted.

Most software packages can run this test.

There are several online calculators available, like this one, and this one.

As a result of using software to test for normality, small p-values in your output generally indicate the data is not from a normal distribution (Ruppert, 2004).
Back to top 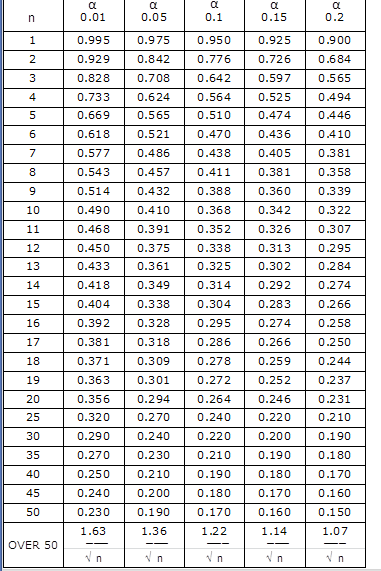 Although the K-S test has many advantages, it also has a few limitations:

What is a Kolmogorov-Smirnov Distribution?

The term “Kolmogorov Smirnov Distribution” refers to the distribution of the K-S statistic. In the vast majority of cases, the assumption is that the underlying cumulative distribution function is continuous. In those cases, the K-S distribution can be globally approximated by the general beta distribution [1].

However, some real-life applications call for a discrete distribution. While it is possible to fit a discrete distribution, working around the jump discontinuities has been problematic. In fact, there are no generally accepted efficient or exact computational methods that deal with this situation. Dimitrova et. al [2] did provide one method for a discontinuous Kolmogorov Smirnov distribution; it results in exact p-values for the test. The approach is beyond the scope of this article, but is involves expressing the complementary PDF through the rectangle probability for uniform order statistics via Fast Fourier Transform.

A K-S random variable Dn with parameter n has a cumulative distribution function of Dn −1/(2n) of [3]: