What is Serial Correlation / Autocorrelation?

Serial correlation (also called Autocorrelation) is where error terms in a time series transfer from one period to another. In other words, the error for one time period a is correlated with the error for a subsequent time period b. For example, an underestimate for one quarter’s profits can result in an underestimate of profits for subsequent quarters. This can result in a myriad of problems, including:

The most common form of autocorrelation is first-order serial correlation, which can either be positive or negative.

Second-order serial correlation is where an error affects data two time periods later. This can happen when your data has seasonality. Orders higher than second-order do happen, but they are rare.

You can test for autocorrelation with: 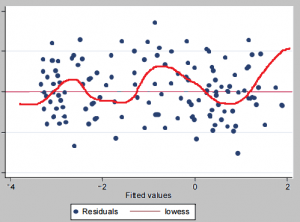 Plot of residuals with a Lowess line in STATA shows that the amplitude of the errors appears to be increasing over time (positive autocorrelation).