Pairwise (Walsh) averages are averages calculated from each pair in a set, including a pair matched with itself. For example, the set {2,9} has three pairs: (2,2),(9,9) and (2,9). The Walsh averages for this set are:

Following this, Walsh averages are used in tests like the Signed-Rank Wilcoxon and other nonparametric tests. In the Wilcoxon signed rank tests, the test statistic is equal to the number of positive Walsh averages (called “offsets”). The formal formula is: (D1 – D2)/2, where D is a data point.

Pairwise comparison is the act of forming pairs with the goal of comparing them in some way. It’s used for head to head comparisons. Each candidate is pitted against every other candidate with points awarded for a “win”. The person/item with the most wins is declared the winner.

In order to find out who is in the lead, we need to know who won most of the match ups. There are several ways you can do this. Perhaps the easiest is a two way table. I’ve blocked out duplicate squares (e.g. Washington/Garfield is in one square while Garfield/Washington is in another) and any square where a person is pitted against themselves (e.g. Washington/Washington):

Next, fill in the winners of each head to head. I’m assigning 4 points for 1st place, 3 points for 2nd place, 2 points for 3rd place and 1 point for fourth place.

Each pair is matched head to head. For example, Garfield (with 12 points) wins over Washington (9 points) and Garfield/LBJ is a tie:

Just by looking at the results we can see that Garfield has the most “wins.”

If the answer isn’t obvious, award 1 point for a win and 1/2 point for a tie. The results for this match up would be:

A scatter plot of the data would look like this: 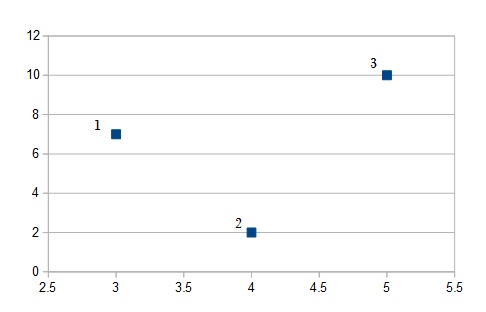 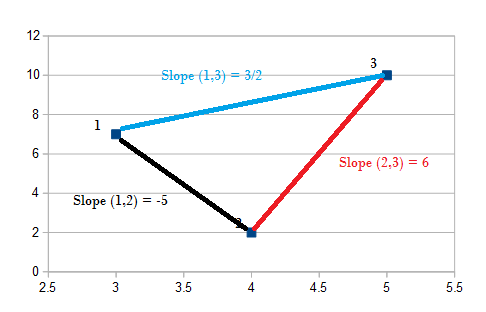 What is “Pairwise Independent”?

What is Mutually Independent?

Question: You toss a fair coin twice. The possible events are:

Are the events mutually independent?

Answer:
What the question is really asking is: do these events fit the definition stated above (right under What is Mutually Independent?. The definition states that the following must be true:
P(A ∩ B ∩ C) = P(A) × P(B) × P(C),
So we need to figure out a few probabilities first from the given information.

P(1 ∩ 2) = P(1 ∩ 3) = P(2 ∩ 3) = 1/4.
This is because HH is the only event that intersects (a 1 out of 4 probability). If you have trouble figuring out intersections, a Venn diagram is always a good idea. the following diagram should help you see that HH is the intersection for all three probabilities: 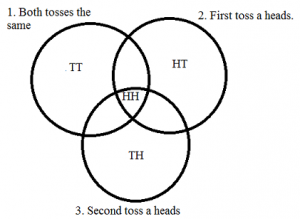