Mean Median Mode: Contents (Click to skip to that section):

Watch the video for an overview and how to find the mean, median, and mode:

The mean median mode are measurements of central tendency. In other words, it tells you where the “middle” of a data set it. Each of these statistics defines the middle differently:

Of the three, the mean is the only one that requires a formula. I like to think of it in the other dictionary sense of the word (as in, it’s “mean” as opposed to nice!). That’s because, compared to the other two, it’s not as easy to work with because of the formula.

Hints to remember the difference between Mean Median Mode

Having trouble with the mean median mode differences? Here’s a couple of hints that can help.

Both are measures of where the center of a data set lies (called “Central Tendency” in stats), but they are usually different numbers. For example, take this list of numbers: 10, 10, 20, 40, 70.

Mean vs Average: What’s the Difference?

When you first started out in mathematics, you were probably taught that an average was a “middling” amount for a set of numbers. You added up the numbers, divided by the number of items you can and voila! you get the average. For example, the average of 10, 6 and 20 is:

The you started studying statistics and all of a sudden the “average” is now called the mean. What happened? The answer is that they have the same meaning(they are synonyms).

However there is a caveat. Technically, the word mean is short for the arithmetic mean. We use different words in stats, because there are multiple different types of means, and they all do different things.

You’ll probably come across these in an elementary stats class. They have very narrow meanings:

There are other types of means, and you’ll use them in various branches of math. However, most have very narrow applications to fields like finance or physics; if you’re in elementary statistics you probably won’t work with them.

These are some of the most common types you’ll come across.

The mode is the most common number in a set. For example, the mode in this set of numbers is 21:

How to find the mean median mode by hand: Steps

How to find the mean median mode: MODE

How to find the mean median mode: MEAN

How to find the mean median mode: MEDIAN

Like the explanation? Check out the Practically Cheating Statistics Handbook, which has hundreds more step-by-step solutions, just like this one!

In order to find the SPSS mean mode median, you’ll need to use the Frequency table. It seems a little counter-intuitive, but the Descriptive Statistics tab does not give you the option to find the mode or the median.

Step 1: Open SPSS. In the “What would you like to do?” dialog box, click the “type in data” radio button and then click “OK.” A new worksheet will open. Note: If you have opted out of the first help screen, you may not see this option. In that case, just start at Step 2. 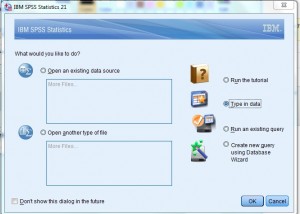 Step 3: Click “Statistics” and then check the boxes “mean”, “mode” and “median.” Click “Continue” twice (select “none” as the chart type in the second window).

Note: In some versions of SPSS, you may only have to click “Continue” once and it may not give you an option for chart type.

The frequency results will appear as output. The top part of the output will display the mean median mode.

If you scroll down, the frequency table will also show you the mode. The mode is defined in statistics as the number with the highest frequency (for this sample data set, the number appearing the most is 66, with two results in the frequency column).

Finding the TI 83 mean or TI 83 median from a list of data can be accomplished in two ways: by entering a list of data, or by using the home screen to type the commands. Using the list feature is just as easy as entering the data onto the home screen, and it has the added advantage that you can use the data for other purposes after you have calculated the mean median mode (for example, you might want to create a TI 83 histogram).

Steps for the Mean Median Mode on the TI 83

Watch the video for the mean and median on the TI 83:


TI83 Mean and Median
Watch this video on YouTube.

Note: The TI-83 plus doesn’t have a built in mode function, but once you’ve entered your list, it’s pretty easy to spot the mode: it’s just the number that occurs most often in the set. Not sure? Read more about the mode here.

Find the Mean in R

Watch the video to learn how to find the mean in R: