Watch the video for an overview of the p-value:

P values are expressed as decimals although it may be easier to understand what they are if you convert them to a percentage. For example, a p value of 0.0254 is 2.54%. This means there is a 2.54% chance your results could be random (i.e. happened by chance). That’s pretty tiny. On the other hand, a large p-value of .9(90%) means your results have a 90% probability of being completely random and not due to anything in your experiment. Therefore, the smaller the p-value, the more important (“significant“) your results.

When you run a hypothesis test, you compare the p value from your test to the alpha level you selected when you ran the test. Alpha levels can also be written as percentages. 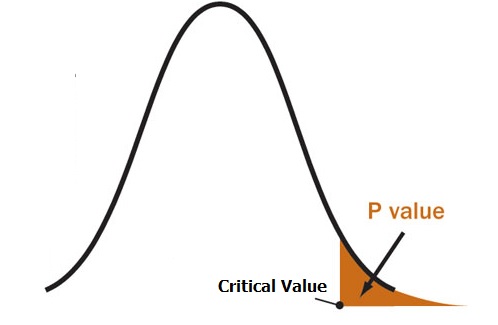 The p value is just one piece of information you can use when deciding if your null hypothesis is true or not. You can use other values given by your test to help you decide. For example, if you run an f test two sample for variances in Excel, you’ll get a p value, an f-critical value and a f-value.

What if I Don’t Have an Alpha Level?

In an ideal world, you’ll have an alpha level. But if you do not, you can still use the following rough guidelines in deciding whether to support or reject the null hypothesis:

How to Calculate a P Value on the TI 83

To get the p-value on a TI 83, run a hypothesis test. Watch the video for the steps:


Example question:The average wait time to see an E.R. doctor is said to be 150 minutes. You think the wait time is actually less. You take a random sample of 30 people and find their average wait is 148 minutes with a standard deviation of 5 minutes. Assume the distribution is normal. Find the p value for this test.

The probability that you would get a sample mean of 148 minutes is tiny, so you should reject the null hypothesis.

Note: If you don’t want to run a test, you could also use the TI 83 NormCDF function to get the area (which is the same thing as the probability value).