What are Observed Variables? 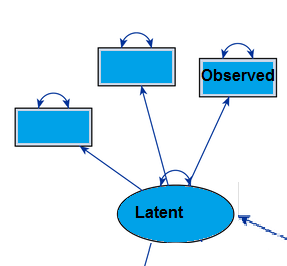 Observed variables are represented by rectangles in SEM.

Observed variables (sometimes called observable variables or measured variables) are actually measured by the researcher. If you’re working with structural equations models (SEM), they are data that actually exists in your data files—data that has been measured and recorded. They can be discrete variables or continuous variables.

Let’s say you were analyzing results from a major depression inventory. Feelings of sadness, lack of interest in daily activities and lack of self-confidence are all measured by the inventory and are therefore observed variables. Other examples: