What is the Null Hypothesis?

This video explains both the null and alternate hypotheses:

Why is it Called the “Null”?

The word “null” in this context means that it’s a commonly accepted fact that researchers work to nullify. It doesn’t mean that the statement is null (i.e. amounts to nothing) itself! (Perhaps the term should be called the “nullifiable hypothesis” as that might cause less confusion).

Why Do I need to Test it? Why not just prove an alternate one?

The short answer is, as a scientist, you are required to; It’s part of the scientific process. Science uses a battery of processes to prove or disprove theories, making sure than any new hypothesis has no flaws. Including both a null and an alternate hypothesis is one safeguard to ensure your research isn’t flawed. Not including the null hypothesis in your research is considered very bad practice by the scientific community. If you set out to prove an alternate hypothesis without considering it, you are likely setting yourself up for failure. At a minimum, your experiment will likely not be taken seriously.

Not so long ago, people believed that the world was flat. 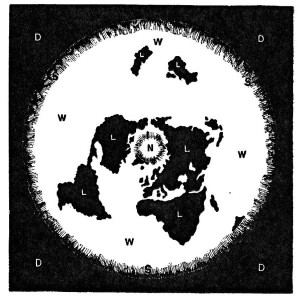 Several scientists, including Copernicus, set out to disprove the null hypothesis. This eventually led to the rejection of the null and the acceptance of the alternate. Most people accepted it — the ones that didn’t created the Flat Earth Society!. What would have happened if Copernicus had not disproved the it and merely proved the alternate? No one would have listened to him. In order to change people’s thinking, he first had to prove that their thinking was wrong.

How to State the Null Hypothesis

Watch the video for a couple of examples:


How To State the Null Hypothesis and Alternate Hypothesis
Watch this video on YouTube.
Can’t see the video? Click here.


How to State the Null Hypothesis from a Word Problem

You’ll be asked to convert a word problem into a hypothesis statement in statistics that will include a null hypothesis and an alternate hypothesis. Breaking your problem into a few small steps makes these problems much easier to handle.

How to State the Null Hypothesis


Step 1: Figure out the hypothesis from the problem. The hypothesis is usually hidden in a word problem, and is sometimes a statement of what you expect to happen in the experiment. The hypothesis in the above question is “I expect the average recovery period to be greater than 8.2 weeks.”

Step 2: Convert the hypothesis to math. Remember that the average is sometimes written as μ.

How to State the Null Hypothesis: Part Two

But what if the researcher doesn’t have any idea what will happen?

Step 1: State what will happen if the experiment doesn’t make any difference. That’s the null hypothesis--that nothing will happen. In this experiment, if nothing happens, then the recovery time will stay at 8.2 weeks.

That’s How to State the Null Hypothesis!

Check out our Youtube channel for more stats tips!