What is a Statistic?

A statistic is a piece of data from a portion of a population. It’s the opposite of a parameter. A parameter is data from a census. A census surveys everyone.

What is a Statistic used for?

Statistics is a way to understand the data that is collected about us and the world. For example, every time you send a package through the mail, that package is tracked in a huge database. The UPS database is 17 terabytes — about as big as if you cataloged every book in the Library of Congress. All of that data is meaningless without a way to interpret it, which is where statistics comes in. Statistics is about data and variables. It’s also about analyzing that data and producing some meaningful information about that data.

What is a Statistic: Types

The word statistic indirectly comes from the medieval Latin word status, for a political state although there is also a closely related word in German (statistik) which is also used in a political sense. “Statistik” was popularized by German political scientist Gottfried Aschenwall (1719-1772) in his “Vorbereitung zur Staatswissenschaft” (1748).

According to Leiden University, it’s difficult to know exactly when the word ceased to have a meaning close to a “political state” and became more of a mathematical term. The first time the word was used in the Oxford English Dictionary is in 1770, in W. Hooper’s translation of Bielfield’s Elementary Universal Education: “The science, that is called statistics, teaches us what is the political arrangement of all the modern states of the known world.” The Online Etymology Dictionary states that the first recorded time the word meant “numerical data collected and classified” was 1829 and the abbreviated form stats first appeared in 1961.

A collection of facts respecting the state of society, the condition of the people in a nation or country, their health, longevity, domestic economy, arts, property and political strength, the state of the country, &c.

What is the Difference Between Inferential and Descriptive Statistics?

Let’s say you worked every week last month and received four paychecks: $100, $105, $110, and $120.
Examples of descriptive statistics about your pay (describing and summarizing the set of data)
Some options available to you:

Examples of inferential statistics about your pay (making predictions):
Perhaps the most obvious inference you can make from your pay is that there’s an upwards trend. It looks like it’s going up by $5 per week, so you can expect to earn $125 in week 5. You can quantify this trend by:

What is a Statistic? Notation

In general, stats notation is in Roman letters, a-z. Parameters have Greek letters or uppercase Roman). If some letters look the same: look closely. For example, look for the small p and large P. Usually, if you see a large letter (i.e. P), it’s a parameter. Small letters usually mean it’s a stat.

What is a Statistic: Data & Variables

You might think that data is a list of numbers. However, in statistics, “Data” means something a little different; Data contains the who and what about something (the “something” could be anything from a book in a bookstore to a batting average to a choice about elections). Data can have numerals that have meaning. For example, 1453767142 is the ISBN for the Practically Cheating Statistics Handbook. The What as it related to ISBNs is the name of the book (The Practically Cheating statistics Handbook) and the Who as it related to book sales could be the person who ordered the book or it could be the purchase orders (as opposed to the individuals who placed those orders).

What is a Statistic: Variable 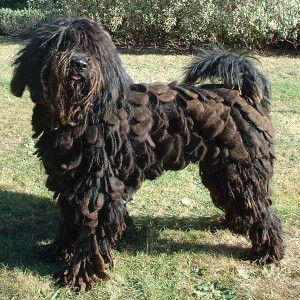 Breeds of dog are categorical variables (this particular dog is a bergamasco). How many dogs is numeric (this picture has one dog).

What is a Statistic: Vital Statistics

Vital statistics can mean one of three things, as far as stats goes:

What is an Estimator?

An estimator (or estimate) is a statistic that’s used to approximate a population parameter. While there are several types of estimators, the word “estimator” on its own usually refers to a point estimate. A point estimate is a single value (as opposed to an interval, like a confidence interval). For example, the mean is a point estimate. The two characteristics of point estimates that are arguably most important are:

When you visit a gas station, you expect that the gas pump is calibrated correctly. And in fact, it has the potential to be a very accurate calibration. However, state inspectors in Houston, Texas, found that around one in five gas pumps weren’t calibrated correctly. An incorrectly calibrated pump could cost a consumer up to 18 cubic inches per five gallons pumped. These pumps showed bias, by consistently overcharging consumers by a certain amount.
Many formulas in stats are designed to eliminate bias. For example, the formula for population variance is:

If this formula is used for the sample variance, it tends to underestimate the true population parameter. Therefore, a slightly modified formula is used with N-1 in the denominator:

This formula is an unbiased estimate for the sample variance.

Your average bathroom scale probably goes up and down like a yoyo, stating a slightly different weight every time you get on it. Your weight might range from 158.1 one minute, to 161.2 the next. However, if you take a large enough sample (say, 30 measurements), your actual weight would probably be close to the mean of these readings. The widespread of weights (anywhere from 158.1 to 161.2) is one example of variability between samples.
Sampling variability is usually measured in terms of standard error. The larger the standard error, the larger the sampling variability.

What is a Statistic in The National Vital Statistics System?

The National Vital Statistics System is a database run by the Centers for Disease Control (CDC). Although the individual states are responsible for actually registering the data, the CDC collaborates with the National Center for Health Statistics, the National Cancer Institute and the Census Bureau to keep an up-to-date database of life and death statistics for the United States. Included are: births, deaths, marriages, divorces, and fetal deaths.

Additional programs related to the National Vital Statistics System include: