A stemplot is like a histogram — they are both tools to help you visualize a data set. Stemplots show a little more information than a histogram and have been a common tool for displaying data sets since the 1970s. They are typically used when there is a medium amount of quantitative variables to analyze; Stemplots of more than 50 observations are unusual. The name “Stem plot” comes because there is one “stem” with the largest place-value digits to the left (shaded in gray in the image below) and one “leaf” to the right.

The first few values from this stemplot are:

What are Stemplots used For?

A stem and leaf plot is a way to plot data where the data is split into stems (the largest digit) and leaves (the smallest digits). They were widely used before the advent of the personal computer, as they were a fast way to sketch data distributions by hand. They are used less frequently today, but you’ll still see some here and there.

The numbers are arranged by place value. The largest place-value digits are placed in the stem. Stemplots in the real world aren’t usually labeled with the place-values that the stem represents — it’s usually up to you to figure it out based on the context and the data. However, in textbooks and other education materials it’s common for stemplots to be labeled. For example, a key next to the following stemplot tells you that 7|5 means 75, indicating that the stem represents tens and the leaf represents units.

Stem and leaf plots are useful in some cases because you can see where the bulk of scores lie. In the above graph, most scores were in the 20s or 60s. Bar graphs also show this information, but the advantage the stem and leaf plot have is that you can see all of the scores (other charts usually show just totals). These types of charts give you a quick overview of a distribution and you can also see the shape of the distribution (think of each leaf as representing a bar on a bar chart). They are also useful for highlighting the mode (the most common number in a data set) and for finding outliers.

Back to back stemplots have two leaves that share a single stem. The stem on the back-to-back stemplot is shaded gray in the following picture.

What does it mean to Trim the Leaves on a Stemplot?

What Does it Mean to Split the Stem on a Stemplot?

How to Make a Stemplot

Stemplots are made up of a stem (usually the highest place value digit) and “leaves”, which are the digits or units. For example, a simple stemplot of 10,21 and 32 would have tens as the highest order digits and 0,1, and 2 as the leaves. Think of a stemplot as being a histogram or bar chart made from actual numbers instead of blocks.

Step 4: Draw an outline of your graph. All that’s really needed to make a simple stemplot is a vertical line: 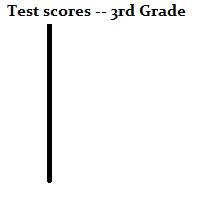 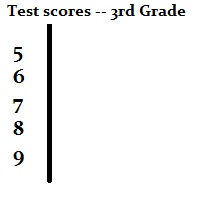 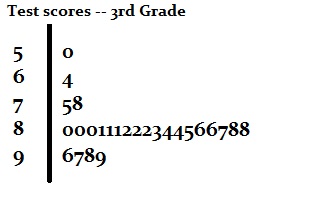 That’s how to make a stemplot, the easy way!