Watch the video for an example of how to find the sample mean:


How to find a sample mean
Watch this video on YouTube.
Can’t see the video? Click here.

The sample mean is an average value found in a sample. 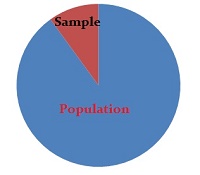 A sample is just a small part of a whole. For example, if you work for polling company and want to know how much people pay for food a year, you aren’t going to want to poll over 300 million people. Instead, you take a fraction of that 300 million (perhaps a thousand people); that fraction is called a sample. The mean is another word for “average.” So in this example, the sample mean would be the average amount those thousand people pay for food a year.

The sample mean is useful because it allows you to estimate what the whole population is doing, without surveying everyone. Let’s say your sample mean for the food example was $2400 per year. The odds are, you would get a very similar figure if you surveyed all 300 million people. So the sample mean is a way of saving a lot of time and money.

The sample mean formula is:

If that looks complicated, it’s simpler than you think (although check out our tutoring page if you need help!). Remember the formula to find an “average” in basic math? It’s the exact same thing, only the notation (i.e. the symbols) are just different. Let’s break it down into parts:

Now it’s just a matter of plugging in numbers that you’re given and solving using arithmetic (there’s no algebra required—you can basically plug this in to any calculator).

You might see the following alternate sample mean formula:
x̄ = 1/ n * ( Σ xi )
The set up is slightly different, but algebraically it’s the same formula (if you simplify the formula 1/n * X, you get 1/X).

How to Find the Sample Mean


Finding the sample mean is no different from finding the average of a set of numbers. In statistics you’ll come across slightly different notation than you’re probably used to, but the math is exactly the same.

The formula to find the sample mean is:

How to Find the Sample Mean: Steps

Step 2:Count the numbers of items in your data set. In this particular data set there are 26 items.

Sample question: If a random sample of size 19 is drawn from a population distribution with standard deviation α = 20 then what will be the variance of the sampling distribution of the sample mean?


How to calculate standard error for the sample mean
Watch this video on YouTube.
Can’t see the video? Click here.

How to Calculate Standard Error for the Sample Mean: Overview

SE = standard error, s = the standard deviation for your sample and n is the number of items in your sample.

Step 3: Square the numbers you calculated in Step 2:

That’s how to calculate the standard error for the sample mean!

Tip: If you’re asked to find the “standard error” for a sample, in most cases you’re finding the sample error for the mean using the formula SE = s/√n. There are different types of standard error though (i.e. for proportions), so you may want to make sure you’re calculating the right statistic.