What is the Population Proportion? 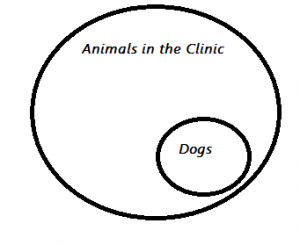 Venn diagram of animals in the clinic, and “dogs”, a subset of the population.

Example question: A veterinary clinic reports that out of 3,412 animals registered at the clinic, 1,712 are dogs, 1,012 are cats and the rest are rodents or birds. What is the population proportion, p, for dogs at the clinic?

To get “p”, just divide the total population (for the above question, that’s animals in the clinic) by the number of items you’re interested in (in the above case, that’s dogs). As a formula, it’s written as:

Note: While “p” is usually used as the symbol for the population proportion, you might also see the letter pi(π) used instead.

In the real world, you usually don’t know facts about the entire population and so you use sample data to estimate p. This sample proportion is written as p̂, pronounced p-hat. It’s calculated in the same way, except you use data from a sample: just divide the total number of items in the sample by the number of items you’re interested in.

Next: Using the Sample Proportion to Estimate p.