1. What is Monte Carlo Simulation?

Monte Carlo simulation (also called the Monte Carlo Method or Monte Carlo sampling) is a way to account for risk in decision making and quantitative analysis. The method finds all possible outcomes of your decisions and assesses the impact of risk. It was invented during the Manhattan Project by John von Neumann and Stanislaw Ulam and named for Ulem’s uncle who enjoyed playing games of chance in Monte Carlo, Monaco.

The technique uses intensive statistical sampling methods that are so complex they are usually only performed with the aid of a computer. The procedure is complex for several reasons:

The Monte Carlo method tells you:

As far as the Manhattan project went, one of the possible events that could have happened was that the atomic bomb caused a chain reaction that blew up the world. The probability was calculated as being so improbable that it was impossible (that said, the simulation did account for the possibility!).

The Monte Carlo simulation returns a quantified probability, which means that it gives you scenarios with numbers you can use. Let’s say you’re company wants to know if local bird life will be adversely affected by the construction of a new factory close to wetlands. A quantified probability would be “If we build the factory, there is a 30% chance the nesting bird population will be adversely affected.” This is more useful that a more general, qualified statement like “If we build the factory, the nesting bird population will be affected”.

Monte Carlo simulations are used in many areas of industry and science, including:

While a Monte Carlo simulation provides some good accuracy, it is unlikely to hit the “exact” mark for several reasons:

In fact, it can be quite easy to run a “bad” Monte Carlo simulation (Brandimarte, 2014). This can happen for a variety of reasons, including:

Let’s say you wanted to find the probability of getting a blackjack (a “21” in cards). Aces are worth 11 points and the following cards are worth ten points: Jack, Queen, King. You could write down all the possibilities:

If you wrote down all of the possible combinations of cards (including all those combinations of two cards that don’t add up to 21, you would find the probability of getting a Blackjack is about 1:21. In other words, the probability of getting a blackjack is one in twenty-one hands. With small numbers, like a deck of cards, figuring out your sample space (i.e. all of the possible outcomes) is fairly simple and doesn’t take a lot of time. But if you have a larger number of inputs — say, thousands of cards, then figuring out a sample space using a probabilistic method like this one becomes unwieldy. Enter the Monte Carlo method.

Another way of figuring out the probability of getting a Blackjack is to choose two cards a set number of times (say, one hundred times) and record the outcomes. The more times you take a sample of two cards, the closer you’ll get to the “real” figure of 1:21. For example, if you choose two cards a thousand times you’re probably going to get very close to 1:21; If you choose two cards a dozen times, you probably won’t get close at all — you might get a run of “luck” or you might get no “21s” at all. This is essentially how Monte Carlo simulations work. Instead of writing out the sample space (which is what we did in the first part of this example), Monte Carlo samples and locates the most likely outcome, creating a stochastic model. The fact that Monte Carlo uses a very simple draw (in this example, two cards), and repeats it over and over again, is why the method is sometimes called The Method of Statistical Trials.
Back to Top

The splitting method is a Monte Carlo simulation for rare events or for sampling from high-dimensional data. The program takes a complex scenario and “splits” it up into easy-to-calculate parts. On a basic level, the program makes the event more likely to occur so that a probability distribution can be found.

A wide variety of software has been developed to run Monte Carlo simulations. These include:

When I first backpacked across the States in the 1980s, McDonald’s was running a promotion where you had to collect little paper Monopoly pieces stuck to the sides of Super Size fries and drinks. Despite knowing the odds were not in my favor, my younger self couldn’t resist purchasing Super Size Fish Filet meals in order to try and win. I think the most I won was a large fry, but it serves to illustrate the power of these marketing techniques.

Usually, the game is really about who is lucky enough to get the rare pieces. In 2016, the rare pieces included Mayfair for £100,000 cash (UK) or Boardwalk for $1,000,000 (US). For this example code, it’s assumed there is an equal chance of getting every playing piece.

Histogramming is a popular way to show results from Monte Carlo simulations. The following histogram shows the results from the above Monopoly piece simulation. 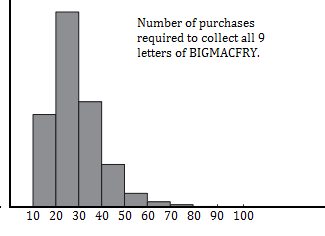 The histogram reveals a couple of surprising results: