Watch the video for how to tell the difference between dependent and independent events:

What is a Dependent Event?

What is an Independent Event?

When two events are independent, one event does not influence the probability of another event. 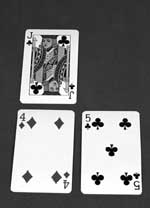 The probability of picking this particular jack is 1/3.

Cards are often used in probability as a tool to explain how one seemingly independent event can influence another. For example, if you choose a card from a deck of 52 cards, your probability of getting a Jack is 4 out of 52. Mathematically, you can write it like this:
P(Jack) = number of Jacks in a deck of cards / total number of cards in a deck = 4/52 = 1/13 ≈ 7.69%.

If you replace the jack and choose again (assuming the cards are shuffled), the events are independent. Your probability remains the same (1/13). Choosing a card over and over again would be an independent event, because each time you choose a card (a “trial” in probability) it’s a separate, non-connected event.

But what if the card was kept out of the pack the next time you choose? Let’s say you pulled the three of hearts, but you’re still searching for that jack. The second time you pull out a card, the deck is now 51 cards, so:
P(Jack) = number of Jacks in a deck of cards / total number of cards in a deck = 4/51 = 1/13 ≈ 7.84%
The probability has increased from 7.69% (with replacement of the jack) to 7.84% (the jack isn’t replaced), so choosing cards in this manner is an example of a dependent event.

How to tell if an event is Dependent or Independent

How Can I Figure out what is a Dependent or Independent event?

Figuring out whether events are dependent or independent events can be challenging. Not all situations are as simple as they first appear. For example, you might think that your vote for president increases their chances of winning, but if you consider the Electoral College, that isn’t always the case. 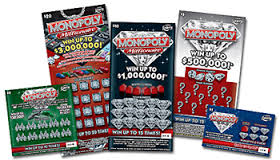 Your odds of winning $1 Million Monopoly isn’t what you think.

You might think you have a chance of winning the top prize in a scratch off game. But the top prize might have already been won when you buy your ticket. For example, at the time of writing, if you purchased ten, two hundred “$1 Million Monopoly” scratch off tickets in Florida, your chances of winning are exactly the same: Zero!. That’s because 0 out of 15 top prizes are remaining! States like Florida keep a “Remaining Prizes” list…but who really checks it?. 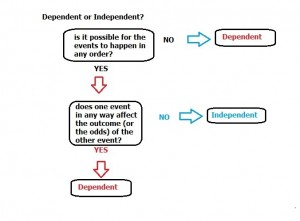 Some examples of events that can clearly be performed in any order are:

Some events that must be performed in a certain order are:

Step 2: Ask yourself, does one event in any way affect the outcome (or the odds) of the other event? If yes, go to step 3a, if no, go to Step 3b.

Some examples of events that affect the odds or probability of the next event include:

Some examples of events that do not affect the odds or probability of the next event occurring are:

That’s how to find out if an event is Dependent or Independent!

There are more formal ways to quantify dependent or independent events. You’ll come across these formulas in basic probability.

You can use the following equation to figure out probability for independent events:
P(A∩B) = P(A) · P(B).