What is a Polynomial Function?

A polynomial function is made up of terms called monomials; If the expression has exactly two monomials it’s called a binomial. The terms can be:

Domain and Range of a Polynomial

The domain and range depends on the degree of the polynomial and the sign of the leading coefficient. Use the following flowchart to determine the range and domain for any polynomial function. 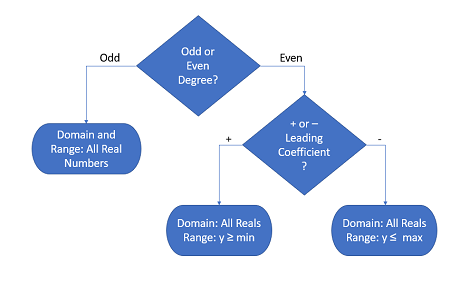 Watch the short video for an explanation:


Polynomial Functions: Domain and Range
Watch this video on YouTube.

What is a Symmetric Polynomial?

A polynomial is a symmetric polynomial if its variables are unchanged under any permutation (i.e. swap). In other words, if you switch out two of the variables, you end up with the same polynomial.

The polynomial x + y + z is symmetric because if you switch any of the variables, it remains the same. In other words,

On the other hand, x1x2 + x2x3 is not symmetric. If you swap two of the variables (say, x2 and x3, you get a completely different expression.

As an example, the elementary symmetric polynomials for the variables x1, x2 and x3 are:

Graphs of a Symmetric Polynomial

They are called “symmetric” not because their graph shows symmetry, but because they remain the same if you permute their roots. As far as graphing, the graph of any symmetric polynomial would look exactly the same no matter which variables you switch around. If the graph changes, then the expression is not symmetric.

Why are Symmetric Polynomials Important?

See also: Testing for Symmetry of a Function.

A univariate polynomial has one variable—usually x or t. For example, P(x) = 4x2 + 2x – 9.In common usage, they are sometimes just called “polynomials”.

For real-valued polynomials, the general form is:

The univariate polynomial is called a monic polynomial if pn ≠ 0 and it is normalized to pn = 1 (Parillo, 2006). In other words, the nonzero coefficient of highest degree is equal to 1.

Extreme Values of a Polynomial

Extreme values of a polynomial are the peaks and valleys of the polynomial—the points where direction changes.


The peaks and valleys are called relative (local) maxima and minima.

The Number of Extreme Values of a Polynomial

The above image demonstrates an important result of the fundamental theorem of algebra: a polynomial of degree n has at most n roots. Roots (or zeros of a function) are where the function crosses the x-axis; for a derivative, these are the extrema of its parent polynomial.


Note that the polynomial of degree n doesn’t necessarily have n – 1 extreme values—that’s just the upper limit. The actual number of extreme values will always be n – a, where a is an odd number.

To find the absolute extreme values of a polynomial: 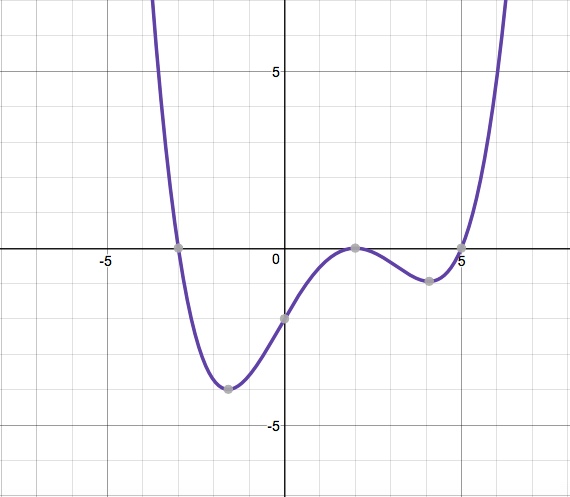 Bernstein Polynomials as Approximations of Functions

Bernstein polynomials, named after Russian mathematician, Sergei Natanovich Bernstein, are a way to approximate the core ingredients of functions.

In many situations, it’s better to use Bernstein polynomials rather than an explicit function of the form y = f(x), because of the limitations of function notation. These include the fact that a vertical line (i.e. a vertical asymptote) x = c cannot be described using function notation.

is a binomial coefficient.
Every Bernstein basis polynomial is nonnegative on [0,1], and zero only at the endpoints [3].

Bernstein polynomials are used in statistics for smoothing and as a basis for Bezier elements used in isogeometric analysis [4]. They form the mathematical foundation for computer-aided geometric design (CAGD); Adobe’s Illustrator and Flash, as well as font imaging systems like Postscript; all use Bernstein polynomials to create Bezier curves— a type of parametric curve.

Chebyshev polynomials crop up in many areas of calculus, including numerical integration, orthogonal polynomials and spectral methods for partial differential equations. They can also be used for curve fitting (finding a function that models a curve), interpolation and in multiple other areas of numerical analysis.

The general formula for a Chebyshev polynomial, for an integer n ≥ 0, is:

Chebyshev Polynomials of the First Kind

Hermite polynomials are a widely used family of polynomials, defined over (-∞, ∞), with a weight function proportional to w(x) = e-x2.

There are several definitions for “Hermite polynomials”, which can be a source of confusion. First, two different starting points result in two different sets of polynomials, often called the “physicists” and “probabilists'” polynomials. Most authors simply refer to Hermite polynomials without any clarification, assuming the reader is working in one field or another (i.e. physics or probability) and therefore don’t need to know the “other” definition.

If you’re in calculus, you’re likely dealing with the “physicists” Hermite polynomials, built from the monomials. The first few are (Sawitzki, 2009):

An alternate definition, with w(x) = e-x2/2 is sometimes used, especially in statistics. The “probabilists'” polynomials are sometimes called Chebyshev-Hermite polynomials (Sawitzki, 2009). The first few are:

Hermite Interpolation and Other Uses

Hermite polynomials are very useful as interpolation functions because their value—and their derivatives values— up to order n are unity at zero at the endpoints of the closed interval [0, 1] (Huebner et al., 2001). They provide an alternative way of representing cubic curves, allowing the curve to be defined in terms of endpoints and derivatives at those endpoints (Buss, 2003).

Hermite polynomials occur in various areas of physics, including as part of the solution to the quantum harmonic oscillator Hamiltonian. They also arise in numerical analysis as Gaussian quadrature.

Orthogonal polynomials are the infinite sequence:

This can be represented by the following integral, which basically means if you multiply the two functions and integrate the result is zero:

The closed interval [a, b] is called the interval of orthogonality; The interval can be infinite at one end, or both.

As an example, of what this integral means, the following image shows the separate integration of two orthogonal polynomials ½(3x2 – 1) and ½(5x3 – 3x) on the closed interval [-1, 1]: 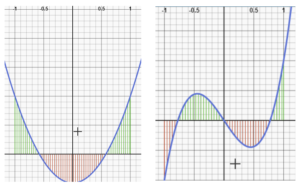 It should come as no surprise then, that the two integrals, when multiplied together on the same interval (see: integration by parts), also equal zero.

Degrees of a Polynomial Function

The graphs of second degree polynomials have one fundamental shape: a curve that either looks like a cup (U), or an upside down cup that looks like a cap (∩).

A cubic function (or third-degree polynomial) can be written as:

where a, b, c, and d are constant terms, and a is nonzero.

Unlike quadratic functions, which always are graphed as parabolas, cubic functions take on several different shapes. We can figure out the shape if we know how many roots, critical points and inflection points the function has.

Third degree polynomials have been studied for a long time. In fact, Babylonian cuneiform tablets have tables for calculating cubes and cube roots. Chinese and Greek scholars also puzzled over cubic functions, and later mathematicians built upon their work.

Roots and Critical Points of a Cubic Function

Let’s suppose you have a cubic function f(x) and set f(x) = 0. Together, they form a cubic equation:

The solutions of this equation are called the roots of the polynomial. There can be up to three real roots; if a, b, c, and d are all real numbers, the function has at least one real root.

The critical points of the function are at points where the first derivative is zero:

We can use the quadratic equation to solve this, and we’d get:

What about if the expression inside the square root sign was less than zero? Then we have no critical points whatsoever, and our cubic function is a monotonic function.

Limit for a Polynomial Function

There’s more than one way to skin a cat, and there are multiple ways to find a limit for polynomial functions. This can be extremely confusing if you’re new to calculus. But the good news is—if one way doesn’t make sense to you (say, numerically), you can usually try another way (e.g. graphically).

Graphical and numerical methods work for all types of functions; Click on the above links for a general overview of using those methods. All work well to find limits for polynomial functions (or radical functions) that are very simple. You might also be able to use direct substitution to find limits, which is a very easy method for simple functions; However, you can’t use that method if you have a complicated function (like f(x) + g(x)).

Step 1: Look at the Properties of Limits rules and identify the rule that is related to the type of function you have. The function given in this question is a combination of a polynomial function ((x2) and a radical function ( √ 2x). It’s what’s called an additive function, f(x) + g(x). The rule that applies (found in the properties of limits list) is:
lim x→a [ f(x) ± g(x) ] = lim1 ± lim2

Examples:
These sequences are usually integer valued (i.e. their inputs are 1, 2, 3, …).
Examples:

One way to identify the generating polynomial function is to plot points on a graph.

Step 2: Sketch a graph of the points from Step 1: 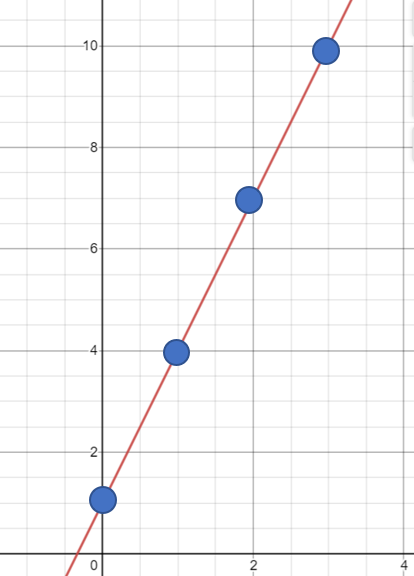 The polynomial function generating the sequence is f(x) = 3x + 1.

finding the Degree of the Generating Polynomial Function

Solution: Find the differences between terms:
6 10 14
And again:
6 6.
We had to find the common difference twice to get a constant row, so the polynomial sequence {2, 8, 18, 32} was generated by a second-degree polynomial.

What is a Zero Polynomial Function?

The zero polynomial function (also called the zero function) has several different definitions, depending on the author. For example, it is sometimes defined as a polynomial with degree of 0 (where the degree of a polynomial is the largest exponent of any term with a nonzero coefficient). However, it could also mean:

One reason for these different definitions is a matter of convenience: depending on what mathematical operation you’re performing, you may want to assign the zero polynomial a degree of -1 or -∞, but as neither of these functions are easy to manipulate it’s usually easier just to leave its degree undefined.

A non-zero polynomial functionhas a degree of 1 or more (not including infinity).

A Special Property of the Zero Polynomial