What is a Gaussian Distribution?

What is a Bell Curve or Gaussian Distribution?

A bell curve is another name for a Gaussian Distribution or normal distribution curve (sometimes just shortened to “normal curve”). The name comes from the fact it looks bell-shaped.

Why the Different Names for the same Distribution?

Although de Moivre first described the normal distribution as an approximation to the binomial, Carl Friedrich Gauss used it in 1809 for the analysis of astronomical data on positions, hence the term Gaussian distribution.

Many phenomena have probability distributions that are bell curves, including:

A Family of Curves

What is a Gaussian Distribution Function?

A Gaussian distribution function can be used to describe physical events if the number of events is very large. In simple terms, the Central Limit Theorem (from probability and statistics) says that while you may not be able to predict what one item will do, if you have a whole ton of items, you can predict what they will do as a whole. For example, if you have a jar of gas at a constant temperature, the Gaussian distribution will enable you to figure out the probability that one particle will move at a certain velocity.

What is Gaussian Quadrature?

Gaussian quadrature is a way to integrate using weighted sums. The basic idea is that you use a Gaussian curve as the superimposing shape, instead of rectangles or a trapezoid.


This can lead to better accuracy than other methods, like the trapezoid rule. The optimal nodes (spacings) in Gaussian quadrature are usually uneven. 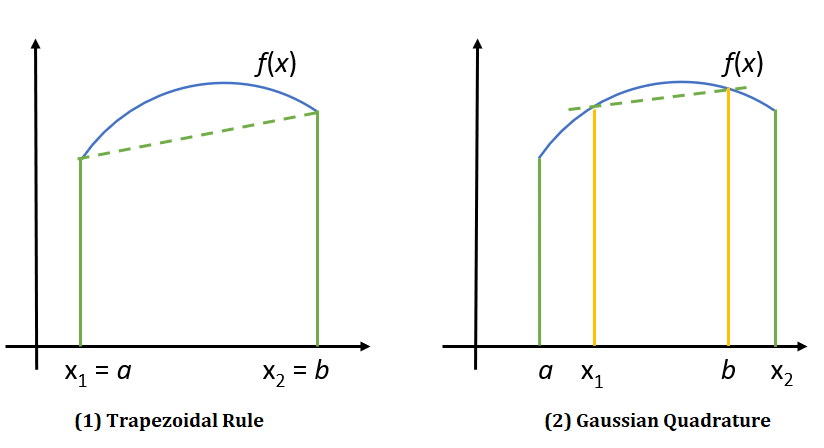 Context:
The highest degree of accuracy with Gaussian quadrature is 2n -1. The goal of the procedure is to find values for the integration which achieve this level of accuracy. The formula is exact for functions f(x) = 1, x, x2, x3,…, xn. To integrate a function over the interval of [-1, 1], you need to find x-values (xi) and weights (wi) so that:

In MATLAB, the Gaussian quadrature rule is implemented with quadl.

The Gaussian function (named after Carl Friedrich Gauss) is a function that produces the classic bell-shaped curve. It is generally defined as:

The above formula is used when the constant a is time. The Gaussian can also be specified with a standard deviation (σ or S), where 2 * S * S appears in the denominator of the exponent (Hahn, 1995).

The function has a global maximum (i.e. maximum height) at x = b, where the slope is zero. The following graph shows how manipulating the value for “b” moves the graph along the x-axis:

The first derivative of the Gaussian function is:

The second derivative is:

Practical Uses of a Gaussian Function

The Gaussian function has a myriad of uses in mathematics and sciences, including machine learning, physics and biomedical sciences. For example, it is the usual choice for radial basis function (RBF) neural network because it generalizes a global mapping and refines local features without altering the learned mapping (Sundararajan & Lu, 1999). In physics, a Gaussian beam is described by a Gaussian function. The Gaussian is the only function that provides the minimum possible time-bandwidth product along all smooth (analytic) functions (Smith,2020). The Birnbaum-Saunders distribution, used in component lifetime testing, is a mixture of an inverse Gaussian distribution and a reciprocal inverse Gaussian distribution (Shakti, 2022).