A timeplot (sometimes called a time series graph) displays values against time. They are similar to Cartesian plane x-y graphs, but while an x-y graph can plot a variety of “x” variables (for example, height, weight, age), timeplots can only display time on the x-axis. Unlike pie charts and bar charts, these plots do not have categories. Timeplots are good for showing how data changes over time. For example, this type of chart would work well if you were sampling data at random times.

The goal of time series analysis is to find patterns in the data and use the data for predictions. For example, if your data is affected by past data, one way to model that behavior is through the AR process.

The following graph shows a physics-related timeplot with the position vs. time for two spark tapes pulled through a spark timer at different constant speeds. 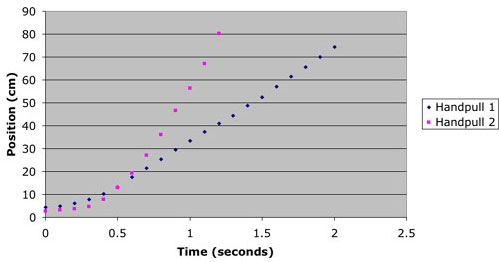 While a timeplot can resemble a scatter plot, with a series of dots, you will often see these plots with the dots connected, especially in financial publications like The Wall Street Journal.

Watch the video, or read the steps below to learn how to make a time plot in Minitab.

A Time plot in Minitab can be created in a few short steps.

Step 1: Type your data into two columns in Minitab. If you don’t have the specific time (i.e. years or days) then enter your data into a single column.

Step 4: Click the variable names you want to graph from the left window and then click “Select” to move the variables over to the Variables window. 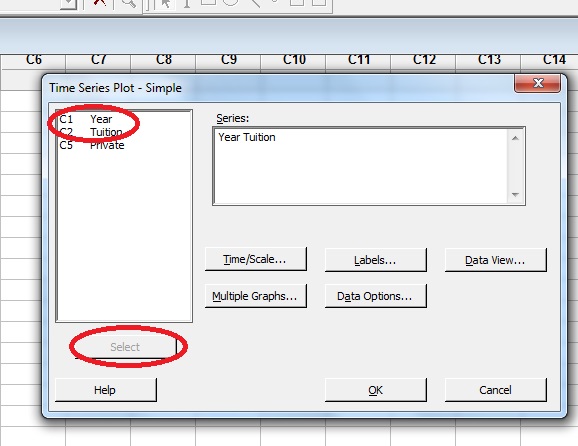 Choosing the variables you want to include in the timeplot in Minitab.

Step 5: Click “OK.” The time plot will appear in a separate window.

Tip: If you have a list of values but no years or other time data associated with the number (for example, days), click “Index” in Step 5. Minitab will create a time plot with an index starting at zero.

Time series patterns can be difficult to analyze because of noise (messy patterns). Analysis is based on the assumption that the data has equal intervals (for example, by month, year, or decade). In order to see underlying trends, sometimes a technique called smoothing is used to create a line graph (a single line on the x-y axis instead of a series of dots). Smoothing is especially important for predicting future events, like seeing if the stock market is trending up, or down.

Smoothing can be done by hand. You basically draw a single, “best fit” line, or a computer can do the smoothing for you. The following graph shows the original timeplot (pink for women and blue for men) along with a line of best fit (green) showing smoothing. 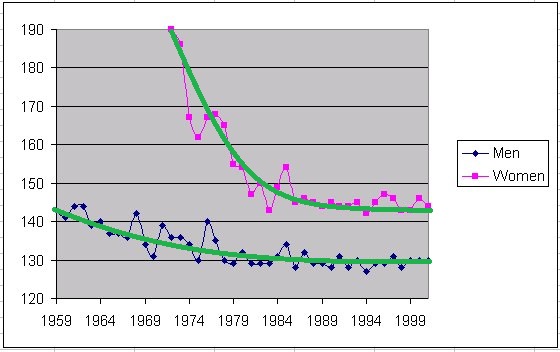 Timeplot smoothing allows you to see the overall trend and also makes it easier to spot outliers. A simple way to smooth timeplots is with a moving average.

Seasonality refers to periodic fluctuations in time series data that happens at regular periods. While traditionally used to literally mean seasons (e.g. Spring, Summer, Autumn, Winter), it can occur during any time period, like hours, days, or weeks.

Seasonality can cause issues with interpreting time series data and so must be included in any model. While seasonal variations—changes that occur in a particular season of the year—are fairly easy to detect in data (a simple scatter plot can often show the trends), seasonality is harder to detect because you don’t know what time periods are fluctuating. Various techniques are available to detect these fluctuations including:

The above image of two subseries plots demonstrates the obvious seasonal trend in the right-hand plot: the data decreases to March, increases towards August and then decreases again. the plot on the left shows no obvious pattern. If you plotted a series of box plots (one for each month), the results would be similar.

Other Factors that Cause Fluctuations

Filtering is where a time series is converted into another time series by a linear operation. Different signals can be filtered using low-pass, band-pass or high-pass filters.

A Dow Jones Timeplot from the Wall Street Journal shows how the stock market changes over time.

Most real-life data sets aren’t stationary. If you’ve got a real-life data set, in most cases you won’t be able to run any processes on the data set directly, and you won’t be able to make useful predictions from it. One solution is to make the model stationary by transforming it. A stationary data set will not experience a change in distribution shape when there’s a shift in time; Basic properties of the distribution like the mean, variance and covariance remain constant. This makes the model better at predictions. After you’ve made predictions, the transformations are reversed so that the new model predicts the behavior of the original time series.

Some models can’t be easily transformed—like models with seasonality, which refers to regular, periodic fluctuations in time series data. These can sometimes be broken down into smaller pieces (a process called stratification) and individually transformed. Another way to deal with seasonality is to subtract the mean value of the periodic function from the data.