What is a Non Parametric Test?

For example, one assumption for the one way ANOVA is that the data comes from a normal distribution. If your data isn’t normally distributed, you can’t run an ANOVA, but you can run the nonparametric alternative—the Kruskal-Wallis test.

If at all possible, you should us parametric tests, as they tend to be more accurate. Parametric tests have greater statistical power, which means they are likely to find a true significant effect. Use nonparametric tests only if you have to (i.e. you know that assumptions like normality are being violated). Nonparametric tests can perform well with non-normal continuous data if you have a sufficiently large sample size (generally 15-20 items in each group).

When to use it

Non parametric tests are used when your data isn’t normal. Therefore the key is to figure out if you have normally distributed data. For example, you could look at the distribution of your data. If your data is approximately normal, then you can use parametric statistical tests.
Q. If you don’t have a graph, how do you figure out if your data is normally distributed?
A. Check the skewness and Kurtosis of the distribution using software like Excel (See: Skewness in Excel 2013 and Kurtosis in Excel 2013).
A normal distribution has no skew. Basically, it’s a centered and symmetrical in shape. Kurtosis refers to how much of the data is in the tails and the center. The skewness and kurtosis for a normal distribution is about 1.

If your distribution is not normal (in other words, the skewness and kurtosis deviate a lot from 1.0), you should use a non parametric test like chi-square test. Otherwise you run the risk that your results will be meaningless. 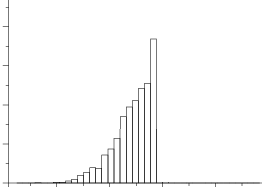 A skewed distribution is one reason to run a nonparametric test.

Other reasons to run nonparametric tests:

The main nonparametric tests are:

The following table lists the nonparametric tests and their parametric alternatives.

However, they do have their disadvantages. The most notable ones are: