1. What is a Continuous Function?

Watch the video for an overview and examples, or read on below:

More formally, a function (f) is continuous if, for every point x = a:

Order of continuity, or “smoothness” of a function, is determined by how that function behaves on an interval as well as the behavior of derivatives.

A C0 function is a continuous function. More specifically, it is a real-valued function that is continuous on a defined closed interval .

This simple definition forms a building block for higher orders of continuity.

A C1 function is continuous and has a first derivative that is also continuous.

Modeling with Order of Continuity

Continuity in engineering and physics are also defined a little more specifically than just simple “continuity.” For example, this EU report of PDE-based geometric modeling techniques describes mathematical models where the C0 surfaces is position, C1 is positional and tangential, and C3 is positional, tangential, and curvature. Which continuity is required depends on the application. For example, modeling a high speed vehicle (i.e. an airplane) needs a high order of continuity compared to a slow vehicle.

If a function is simply “continuous” without any further information given, then you would generally assume that the function is continuous everywhere (i.e. the set of all real numbers from -∞ to + ∞). However, sometimes a particular piece of a function can be continuous, while the rest may not be.

These functions have the “smoothest” type of continuity, followed by uniform continuity and then plain old continuity. All absolutely continuous functions are continuous, but the converse is not true.

The formal definition is frequently used in real analysis, particularly for proving the Fundamental Theorem of Calculus for the Lebesgue Integral [4].

An absolutely continuous function, defined on a closed interval, has the following property. The property is based on a positive number ε and its counterpart, another positive number δ.

In summation notation, we can state the above as: when a finite sequence of non-overlapping intervals satisfies:

Where (xk, yk) are the non-overlapping subintervals.

Every convex function and every continuously differentiable function is absolutely continuous [3].

Given a real-valued absolutely continuous function, the following properties hold [6]:

A left-continuous function is continuous for all points from only one direction (when approached from the left).

It is a function defined up to a certain point, c, where:

The following image shows a left continuous function up to the point x = 4: 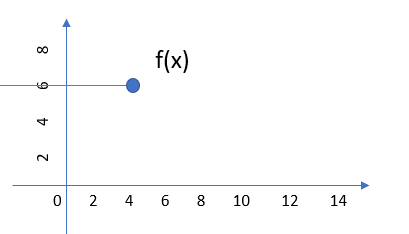 Formal Definition of a Left-Continuous Function

In other words, f(x) approaches c from below, or from the left, or for x < c (Morris, 1992). The right-continuous function is defined in the same way (replacing the left hand limit c- with the right hand limit c+ in the subscript).


Note that this type of continuity is defined for a point, not for an entire function.

The reason why the function isn’t considered right continuous is because of how these functions are formally defined. Two conditions must be true about the behavior of the function as it leads up to the point:

A uniformly continuous function on a given set A is continuous at every point on A. The way this is checked is by checking the neighborhoods around every point, defining a small region where the function has to stay inside.

More formally, this is stated as:

What that formal definition is basically saying is choose some values for ε, then find a δ that works for all of the x-values in the set. If the same values work, the function meets the definition.

Graph of a Uniformly Continuous Function

Graphically, look for points where a function suddenly increases or decreases curvature. The definition doesn’t allow for these large changes; It’s very unlikely you’ll be able to create a “box” of uniform size that will contain the graph. The function might be continuous, but it isn’t uniformly continuous.


The game here is to try and find a uniform box of height x width = 2ε x 2 δ that, when moved, will keep the graph contained within the edges of the box. So, in a way, the “uniform” part of the definition refers to a “box of uniform size”.


Properties of a Uniformly Continuous Function

All of the following functions are generally continuous:

5. How to check for the continuity of a function

There are a few general rules you can refer to when trying to determine if your function is continuous. For some functions, you need to do a little detective work. (For a more rigorous approach, see: Continuity Test).

Step 1: Draw the graph with a pencil to check for the continuity of a function. If your pencil stays on the paper from the left to right of the entire graph, without lifting the pencil, your function is continuous. In other words, if your graph has gaps, holes or is a split graph, your graph isn’t continuous.

Step 4: Check your function for the possibility of zero as a denominator. The ratio f(x)/g(x) is continuous at all points x where the denominator isn’t zero. In other words, there’s going to be a gap at x = 0, which means your function is not continuous.

Definition of a Continuous Variable

A continuous variable has an infinite number of potential values.
It’s the opposite of a discrete variable, which can only take on a finite (fixed) number of values.


Discrete vs continuous variables
Watch this video on YouTube.

A continuous variable doesn’t have to include every possible number from negative infinity to positive infinity. In most cases, it’s defined over a range. For example, the range might be between 9 and 10 or 0 to 100. Even though these ranges differ by a factor of 100, they have an infinite number of possible values.

As an example, let’s take the range of 9 to 10. Possible continuous variables include:

What is a Discrete Variable?

What is a Discrete Variable? Examples

Some examples of discrete variables:

Dates are interval scale variables. For example, a century is 100 years long no matter which time period you’re measuring: 100 years between the 29th and 20th century is the same as 100 years between the 5th and 6th centuries. Although this seems intuitive, dates highlight a significant problem with interval scales: the zero is arbitrary. This means you have to be very careful when interpreting intervals. For example, in the A.D. system, the 0 year doesn’t exist (A.D. starts at year 1). However, some calendars include zero, like the Buddhist and Hindu calendars.

Arbitrary zeros mean that you can’t say that “the 1st millennium is the same length as the 2nd millennium.”

Arbitrary zeros also means that you can’t calculate ratios. Ratio scales (which have meaningful zeros) don’t have these problems, so that scale is sometimes preferred.

A ratio scale has all the properties of an interval scale, plus a fixed natural zero.

Ratio data this scale has measurable intervals. For example, the difference between a height of six feet and five feet is the same as the interval between two feet and three feet. Where the ratio scale differs from the interval scale is that it also has a meaningful zero. Zero means that something doesn’t exist, or lacks the property being measured. For example, the zero in the Kelvin temperature scale means that the property of temperature does not exist at zero.

Other examples of the ratio scale:

The Ratio Scale and Negative Numbers

As the “0” in the ratio scale means the complete absence of anything, there are no negative numbers on this scale.

Invariant Under a Similarity Transformation

Data on a ratio scale is invariant under a similarity transformation, y= ax, a >0. For example, you could convert pounds to kilograms with the similarity transformation K = 2.2 P. The ratio stays the same whether you use pounds or kilograms. Although the ratio scale is described as having a “meaningful” zero, it would be more accurate to say that it has a meaningful absence of a property; Zero isn’t actually a measurement of anything—it’s an indication that something doesn’t have the property being measured. For example, 0 pounds means that the item being measured doesn’t have the property of “weight in pounds.”

The Ratio Scale and Ratios

As the name suggests, we can create meaningful ratios between numbers on a ratio scale.
For example, a count of how many tests you took last semester could be zero if you didn’t take any tests. However, if you took two exams this semester and four the last semester, you could say that the frequency of your test taking this semester was half what it was last semester.

Scales of measurement, like the ratio scale, are infrequently mentioned in calculus classes. But in applied calculus (a.k.a. in the real world), you likely be using them a lot. For example, economic research using vector calculus is often limited by a measurement scale; only those values forming a ratio scale can form a field (Nermend, 2009).