What is a Second Derivative?

One reason to find a 2nd derivative is to find acceleration from a position function; the first derivative of position is velocity and the second is acceleration. This is useful when it comes to classifying relative extreme values; if you can take the derivative of a function twice you can determine if a graph of your original function is concave up, concave down, or a point of inflection.

The key to finding the second derivative implicitly requires a good understanding of the chain rule. For example, to take the derivative of an expression like 4y2 with respect to x, you have an inside function and an outside function:

That results in 8yy′.

Step 1: Take the derivative(s) of the left hand side. We have two parts to differentiate: x2 and 4y2:

Combining the answers (because of the Sum Rule) we get:
2x + 8yy′

This is the first implicit derivative.

You may be wondering why I split this up into three parts. After all, finding the derivative of 25 is something you can probably do in an instant. That’s because some implicit derivatives are more complicated (e.g. 3xy2 – 2x = 4y) and breaking the problems up into small chunks can make it easier to keep track of the parts.

You could jump right in at this point and re-run the steps above to get the second derivative. However, you’ll end up with yy′′ in the solution, which means you’ll have to backtrack and solve the earlier equation for y′.
Rather than do that, I like the approach given on MIT’s Open Courseware site [1]: It’s better to streamline and solve for y′ first.

Step 4: Differentiate both sides again. The right hand side of this particular equation is solved with the quotient rule: 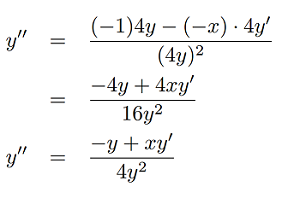 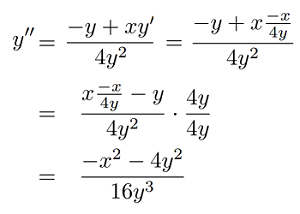 This test is used to find intervals where a function has a relative maxima and minima. You can also use the test to determine concavity.

The second derivative test for extrema

The test for extrema uses critical numbers to state that:

The second derivative test for concavity states that:

Example problem: What concavity does the graph x3 have between -2 and 3? Where are the local minimum(s) and local maximum(s)?


Step 1: Find the critical values for the function. 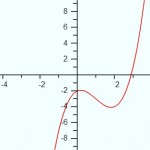 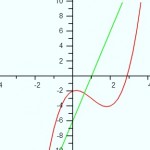 Only Critical Point in Town Test

The Only Critical Point in Town test is a way to find absolute extrema for functions of one variable. The test fails for functions of two variables (Wagon, 2010), which makes it impractical for most uses in calculus. Most mentions of the test in the literature (most notably, Rosenholtz & Smylie, 1995, who coined the phrase) show examples of how the test fails, rather than how it works.

Definition for the Only Critical Point in Town test

The test states that:

Suppose that a continuous function f, defined on a certain interval, has a local extrema at point x0. If x0 is the function’s only critical point, then the function has an absolute extremum at x0

To put that another way, If a real-valued, single variable function f(x) has just one critical point and that point is also a local maximum, then the function has its global maximum at that point (Wagon 2010).

The only critical point in town test can also be defined in terms of derivatives: