1. What is a Bounded Function?

Bounded functions have some kind of boundaries or constraints placed upon them. Most things in real life have natural bounds: cars are somewhere between 6 and 12 feet long, people take between 2 hours and 20 hours to complete a marathon, cats range in length from a few inches to a few feet. When you place those kinds of bounds on a function, it becomes a bounded function.

In order for a function to be classified as “bounded”, its range must have both a lower bound (e.g. 7 inches) and an upper bound (e.g. 12 feet). 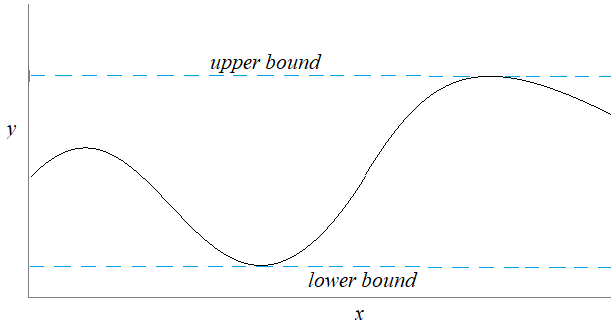 Any function that isn’t bounded is unbounded. A function can be bounded at one end, and unbounded at another.

Upper Bound for a Bounded Function

If a function only has a range with an upper bound (i.e. the function has a number that fixes how high the range can get), then the function is called bounded from above. Usually, the lower limit for the range is listed as -∞.

More formally, an upper bound is defined as follows:

Basically, the above definition is saying there’s a real number, M, that we’ll call an upper bound. Every element in the set is lower than this value M. Don’t get confused by the fact that the formal definition uses an “x” to denote the elements in the set; It doesn’t mean x-values (as in, the domain). The definition of bounded only applies to the range of values a function can output, not how high the x-values can get.

The exact definition is slightly different, depending on where you’re using the term. 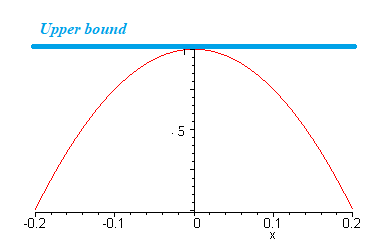 The upper bound of a function (U) is that function’s largest number. More formally, you would say that a function f has a U if f(x) ≤ U for all x in the function’s domain.

If you’re working with an interval (i.e. a small piece of the function), then U on the interval is the largest number in the interval. In notation, that’s:
f(x) ≤ U for all x on [a, b].

The upper bound of an integral is the where you stop integrating. It’s above the integral symbol:

In estimation, an “upper bound” is the smallest value that rounds up to the next value.

For example, let’s say you had an object that was 7 cm long, rounded to the nearest cm. The upper bound is 7.5 cm, because 7.5 cm is the smallest length that would round up to the next increment—8 cm. Similarly, a lower bound is the smallest value that rounds up to 7cm— 6.5 cm.

You’re stating that the 7 cm object is actually anywhere between 6.5 cm (the lower bound) and 7.5 cm (the upper bound).

Least upper bound (LUB) refers to a number that serves as the lowest possible ceiling for a set of numbers.

Where things get a little interesting is when a set of numbers doesn’t have an upper bound. In that case, the supremum is the number that “wants to be the greatest element” (Howland, 2010). Take the open interval {0,2}. Although the set is bounded by the number 0 and 2, they aren’t actually in the set. However, 2 wants to be the greatest element, and so it’s the least upper bound.


Any set of real numbers ordered with < has a least upper bound. Some sets don’t have a supremum. For example (Holmes, n.d.):


*The rational numbers pose all kinds of problems like this that render them “…unfit to be the basis of calculus” (Bloch, p.64).

In more formal terms:
If M is a set of numbers and M is a number, we can say that M is the least upper bound or supremum of M if the following two statements are true:

Assume that M is the least upper bound for M.  What this means is that for every number x ∈ M we have x ≤ M.  For any set of numbers that has an upper bound, the set is bounded from above.

If a function has a range with a lower bound, it’s called bounded from below. Usually, the lower limit for the range is listed as +∞. The formal definition is almost the same as that for the upper bound, except with a different inequality.