What is a Cauchy Distribution?

The Cauchy distribution is well known for the fact that it’s expected value and other moments do not exist. The median and mode do exist. And for the Cauchy, they are equal. Together, they tell you where the line of symmetry is. However, the Central Limit theorem doesn’t work for the limiting distribution of the mean. In sum, this distribution behaves so abnormally it’s sometimes considered the Hannibal Lecter of distributions.

So, if it doesn’t work so well, why study it at all? While it’s often used as an example of the “opposite” of how distributions should work, it does have a few practical applications. For example:

The Cauchy distribution has two main parts: a scale parameter (λ) and a location parameter (x0). 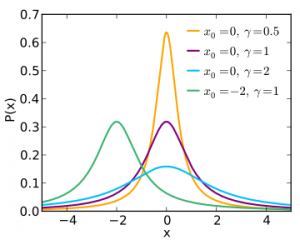 On μ and σ

Sometimes, you might see the more recognizable μ (i.e. the mean) instead of (x0). However, as the mean doesn’t technically exist, the notation μ is best avoided because of the potential confusion. If you do use μ you should think of it as the middle of the curve (rather than the average). Lambda is about the same as the standard deviation, σ. But as the standard deviation doesn’t exist for this distribution either, you may want to avoid using σ as well.

You can find some additional info on the proofs here and a different interpretation here.

The formula for the probability density function is:

This online calculator at Casio.com will calculate the PDF as well as the upper and lower CDF for a Cauchy distribution.