Multiple imputation (MI) is a way to deal with nonresponse bias — missing research data that happens when people fail to respond to a survey. The technique allows you to analyze incomplete data with regular data analysis tools like a t-test or ANOVA. Impute means to “fill in.” With singular imputation methods, the mean, median, or some other statistic is used to impute the missing values. However, using single values carries with it a level of uncertainty about which values to impute. Multiple imputation narrows uncertainty about missing values by calculating several different options (“imputations”). Several versions of the same data set are created, which are then combined to make the “best” values.

With the multiple imputations method, missing values are replaced by m > 1 possibilities, where m is usually < 10.


The general, very simplified, procedure (as outlined by Rubin, 1987) is a series of steps: 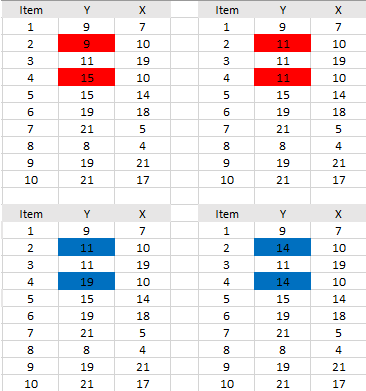 Although the simplified example above might seem intuitive, the calculations for approximating missing values are surprisingly complex. They involve:

Not only are multiple possibilities for the missing values calculated, but each suggested value can come from a different probability distribution. This analysis is practically impossible by hand without a good grasp of Bayesian methodology. Schafer (1999) warns that

“…a naïve or unprincipled imputation method may create more problems than it solves, distorting estimates, standard errors and hypothesis tests.”

To avoid these pitfalls, Rubin (1991) recommends that imputations should:

Most popular statistical software packages have options for multiple imputation, which require little understanding of the background Bayesian workings. For example, the IBM SPSS MI procedure is basically a point-and-click:

Other popular software options include:

Using software isn’t a perfect solution. Care should be taken to choose appropriate models for your data. For example, if your data isn’t normally distributed, you may need to transform your variables so that they approximate a normal distribution before running an imputation procedure. In other words, it isn’t as simple as inputting your data and clicking a multiple imputation option. Incorrect model choices, failure to include moderating variables, or excluding vital data points can all lead to even more bias than you would have had without running the procedure in the first place.

Other Options for Missing Data


No one “perfect” method exists for filling in missing data. As outlined above, multiple imputations can be difficult to understand and implement without some understanding of model selection and Bayesian theory. Some other options, which are simpler and may be more efficient than MI, include:


Further Reading:
For an in-depth look at MI, you really can’t beat D. B. Rubin’s original work Multiple imputation for nonresponse in surveys (New York: John Wiley, 1987). If you can’t find the book, you can read a pdf of Rubin’s MI method here.