Bayesian analysis provides a special method for calculating probability estimates, for choosing between hypotheses, and for learning about population statistic values. To explore its basic workings, we’ll start with a scenario involving medical testing and diagnosis.

Table 12.1 shows the various possible conditions and outcomes of a diagnostic test for a fictional disease, Krobze.

In particular, Bayesian analysis can be used to estimate conditional (if…then…) probabilities like:

Listed below is this required information, which is then used to fill in Table 12.2.

Notice that in addition to using the above information to fill in Table 12.2—shown in bold—another row has been added to the bottom of the Table for column sums.

Let’s use Table 12.2 to answer the questions posed above, using Bayesian analysis.

Many people feel that all of this makes better sense when we use frequencies rather than probabilities, so let’s do it that way too.

Consider 1,000 random people. Below are the frequencies we expect, which are then used to fill in Table 12.3.

The Bayesian analysis method is especially useful because it can be used successively to update probability estimates. Let’s say you tested positive the first time and want to have another type of test (with the same diagnostic reliability) performed. Table 12.4 shows the conditions and outcomes for the second test. The posterior probability of 0.074766 based on your first positive test now becomes the prior probability for the
second test.

Keep in mind that Krobze is fairly rare (1 in a 100). So, false positive test results tend to dominate the Test Positive column: that’s largely why we got 7% after the first positive test and 39% after the second positive test. Test reliability matters too, as we’ll see next.

Let’s say that instead, the doctor orders a much more reliable (and much more expensive) test the second time. It detects both true negatives and true positives 99% of the time. Table 12.5 covers this situation.

So far, I’ve used a table format to illustrate the application of Bayes’ Formula because I have found that people have an easier time following along than when I use the official formula. That said, I would be remiss if I didn’t show you the formula. There are several renditions of Bayes’ formula to choose from. This rendition aligns best with the table format we’ve been using.

Using again the first Krobze example when you test positive the first time, we get

This is the same posterior probability that we got earlier using the table format.

Bayesian Analysis: A Note on Priors

With the above analyses we were extremely fortunate to know that, in general, 1 in 100 people have Krobze. That gave us our initial prior probabilities (0.01 and 0.99) which we needed to get started. What if we don’t know these initial prior probabilities? One alternative is to use expert opinion, which is somewhat subjective and may be quite incorrect. Another is to use what are called noninformative priors.

For example, if we have no idea what the initial prior probability of Krobze is, we could use the noninformative priors of equal probabilities for Don’t Have Krobze (0.5) and Have Krobze (0.5). As you can imagine, we’ll get quite different results using priors of 0.5 and 0.5 instead of 0.99 and 0.01. Determining valid priors is important, and it can be tricky. But luckily, the more data we have to update the prior with, the less important the prior becomes. Frequentist statistics does not incorporate prior probabilities into the analysis and so it doesn’t need to make assumptions about priors.

A Note on Testing Competing Hypotheses in Bayesian Analysis

Since Frequentist statistics does not incorporate prior probabilities into its analysis, it never derives a probability that a given hypothesis is true. 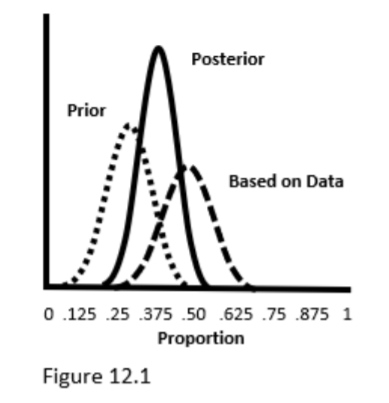 From the posterior, we can see that the most likely estimate for the population proportion is .375. We can also determine the interval containing 95% of the posterior’s area: from .25 to .50. This is called a Bayesian credible interval, which is subtly different from a Frequentist confidence interval. Credible Interval: Given our priors and our sample data, there is a 95% chance that the population proportion falls within the 95% credible interval; valid priors and distributional assumptions need to be incorporated into the analysis.

Confidence Interval: 95% of the 95% confidence intervals derived from sample data will contain the population proportion; no priors are needed and the statistical methods themselves embody distributional assumptions (such as assuming that the z-distribution is an appropriate approximation to the binomial distribution).

Content for this article is published via Copyleft. You are free to copy and distribute the content of this article.