What is the Gumbel Distribution?

The Gumbel distribution (also called the Gumbel type) is a popular, asymmetric, extreme value distribution(EVD), used to model maximums and minimums. For example, the EVD Type I has been used to predict earthquakes, floods and other natural disasters, as well as modeling operational risk in risk management and the life of products that quickly wear out after a certain age. This skewed left distribution is also known as EVD type I.

There are two forms of EVD Type I: the minimum and maximum distributions.

The general form of the PDF for the minimum Gumbel is:

The probability density function has only one, unchanging shape which shifts according to the location parameter, μ. As μ increases, the distribution shifts to the left; As μ decreases, it shifts to the right.

When μ = 0 and β = 1, the distribution is called the Standard Gumbel Distribution (minimum). The PDF becomes:
ex e-ex. 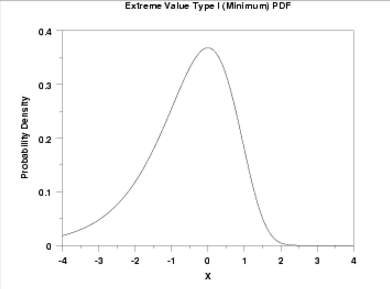