What is Inverse Sampling?

In inverse sampling (sometimes called standard inverse sampling), you continue to choose items until an event has occurred a specified number of times. It is often used when you don’t know the exact size of the sample you want to take. For example, let’s say you were conducting a wildlife management survey and wanted to capture 20 banded birds. You capture birds at random until you have collected 20 banded birds (and an unknown number of unbanded birds). The resulting sample size could be 100 birds, or it could be 88 birds, or 203 birds and so on. 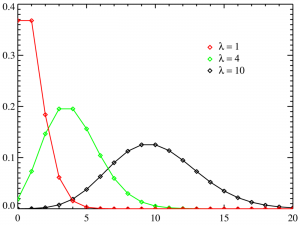 The Poisson family of distributions can be used for inverse sampling.

In a binomial experiment, where an event is either going to happen, or it’s not going to happen, this type of sampling is called negative binomial sampling. The two terms (inverse sampling and negative binomial sampling) are often used interchangeably. However, Inverse Sampling can refer to sampling based on either the Negative Binomial Distribution (in which case it is called Negative Binomial Sampling) or the Poisson Distribution. If sampling is performed based on the Poisson distribution, you’re interested in events occurring in a certain time period. For example, you might be interested in how many accidents happen on a particular road over the period of one week.

Inverse sampling is often performed when a certain characteristic is rare. For example, it is a good method for detecting differences between two different treatments for a rare disease; It avoids the problem of sparse data due to a disease’s rarity. According to Lavkras, Play-the-winner sampling is preferred for clinical trials because the sample with the poorer population will always be smaller than the sample with the “better” population.

In general, inverse sampling will give you more precise estimates than direct sampling (Scheaffer et. al, 2011), as long as the sample size n required to obtain n individuals is small compared to the population size N. However, as the sample size is unknown and could theoretically be infinite (in some cases), this technique can be costly, labor-intensive, and time consuming. Compared to random sampling estimated variances are usually much larger.