What is Non-Probability Sampling? 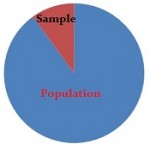 Watch the video for an overview of the different types of non-probability sampling:

One major disadvantage of non-probability sampling is that it’s impossible to know how well you are representing the population. Plus, you can’t calculate confidence intervals and margins of error. This is the major reason why, if at all possible, you should consider probability sampling methods first.