What is a Logistic Distribution? 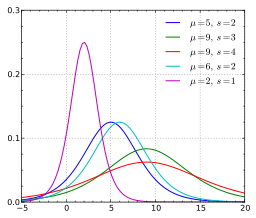 Why is it Used?

The logistic distribution is mainly used because the curve has a relatively simple cumulative distribution formula to work with. The formula approximates the normal distribution extremely well.

Finding cumulative probabilities for the normal distribution usually involves looking up values in the z-table, rounding up or down to the nearest z-score. Exact values are usually found with statistical software, because the cumulative distribution function is so difficult to work with, involving integration:

Although there are many other functions that can approximate the normal, they also tend to have very complicated mathematical formulas. The logistic distribution, in comparison, has a much simpler CDF formula:

Two parameters define the shape of the distribution:

The probability density function for the distribution is:

Check out our YouTube Channel for hundreds of elementary statistics and probability videos!