Watch the video for an overview of the F Test:

What is an F Test?

An “F Test” is a catch-all term for any test that uses the F-distribution. In most cases, when people talk about the F-Test, what they are actually talking about is The F-Test to Compare Two Variances. However, the f-statistic is used in a variety of tests including regression analysis, the Chow test and the Scheffe Test (a post-hoc ANOVA test).

General Steps for an F Test

If you’re running an F Test, you should use Excel, SPSS, Minitab or some other kind of technology to run the test. Why? Calculating the F test by hand, including variances, is tedious and time-consuming. Therefore you’ll probably make some errors along the way.

If you’re running an F Test using technology (for example, an F Test two sample for variances in Excel), the only steps you really need to do are Step 1 and 4 (dealing with the null hypothesis). Technology will calculate Steps 2 and 3 for you.

A Statistical F Test uses an F Statistic to compare two variances, s1 and s2, by dividing them. The result is always a positive number (because variances are always positive). The equation for comparing two variances with the f-test is:
F = s21 / s22

Several assumptions are made for the test. Your population must be approximately normally distributed (i.e. fit the shape of a bell curve) in order to use the test. Plus, the samples must be independent events. In addition, you’ll want to bear in mind a few important points:

Need help with a specific question? Check out our tutoring page!
Warning: F tests can get really tedious to calculate by hand, especially if you have to calculate the variances. You’re much better off using technology (like Excel — see below).

These are the general steps to follow. Scroll down for a specific example.

Step 5: Look at the f-value you calculated in Step 3 in the f-table. Note that there are several tables, so you’ll need to locate the right table for your alpha level. Unsure how to read an f-table? Read What is an f-table?.

Step 6: Compare your calculated value (Step 3) with the table f-value in Step 5. If the f-table value is smaller than the calculated value, you can reject the null hypothesis.

Watch the video for an example of a two-tailed F test:

With a two tailed F test, you just want to know if the variances are not equal to each other. In notation:
Ha = σ21 ≠ σ2 2

Step 4: Choose an alpha level. No alpha was stated in the question, so use 0.05 (the standard “go to” in statistics). This needs to be halved for the two-tailed test, so use 0.025. 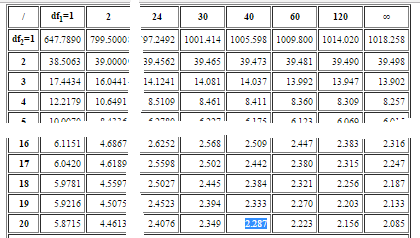 Warning: Excel has a small “quirk.” Make sure that variance 1 is higher than variance 2. If it isn’t switch your input data around (i.e. make input 1 “B” and input 2 “A”). Otherwise, Excel will calculate an incorrect f-value. This is because the variance is a ratio of variance 1/variance 2, and Excel can’t work out which set of data is set 1 and set 2 without you explicitly telling it. 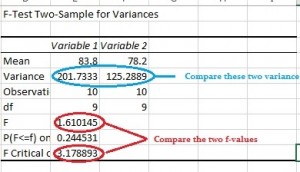