Watch the video for an overview of one-tailed tests (left and right) or two tails:

If you can sketch a graph, you can figure out which tail is in your test.
Back to Top

Example question: You are testing the hypothesis that the drop out rate is more than 75% (>75%). Is this a left-tailed test or a right-tailed test?

Step 3: Shade in the related area under the normal distribution curve. The area under a curve represents 100%, so shade the area accordingly. The number line goes from left to right, so the first 25% is on the left and the 75% mark would be at the left tail.

The yellow area in this picture illustrates the area greater than 75%. Left Tailed Test or Right Tailed Test? From this diagram you can clearly see that it is a right-tailed test, because the shaded area is on the right.

Note: This next picture represent the phrase “less than 25%”. You can see that it would be a left-tailed test from the picture, as the tail is shaded on the left. 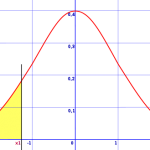 How to Run a Right Tailed Test

Here’s what the right tailed test looks like on a graph:

As you can see, the rejection region (shaded in yellow) is to the right of the graph.

What is a Right Tailed Test?

A right tailed test (sometimes called an upper test) is where your hypothesis statement contains a greater than (>) symbol. In other words, the inequality points to the right. For example, you might be comparing the life of batteries before and after a manufacturing change. If you want to know if the battery life is greater than the original (let’s say 90 hours), your hypothesis statements might be:
Null hypothesis: No change or less than (H0 ≤ 90).
Alternate hypothesis: Battery life has increased (H1) > 90.

The important factor here is that the alternate hypothesis(H1) determines if you have a right tailed test, not the null hypothesis.

A high-end computer manufacturer sets the retail cost of their computers based in the manufacturing cost, which is $1800. However, the company thinks there are hidden costs and that the average cost to manufacture the computers is actually much more. The company randomly selects 40 computers from its facilities and finds that the mean cost to produce a computer is $1950 with a standard deviation of $500. Run a hypothesis test to see if this thought is true.


This z-table shows the area to the right of the mean, so you’re actually looking up .45, not .95. That’s because half of the area (.5) is not actually showing on the table.