What is the Scheffe Test?

The Scheffe Test (also called Scheffe’s procedure or Scheffe’s method) is a post-hoc test used in Analysis of Variance. It is named for the American statistician Henry Scheffe. After you have run ANOVA and got a significant F-statistic (i.e. you have rejected the null hypothesis that the means are the same), then you run Sheffe’s test to find out which pairs of means are significant. The Scheffe test corrects alpha for simple and complex mean comparisons. Complex mean comparisons involve comparing more than one pair of means simultaneously.

Out of the three mean comparisons test you can run (the other two are Fisher’s LSD and Tukey’s HSD). The Scheffe test is the most flexible, but it is also the test with the lowest statistical power. Deciding which test to run largely depends on what comparisons you’re interested in:

Only run this test if you have rejected the null hypothesis in an ANOVA test, indicating that the means are not the same. Otherwise, the means are equal and so there is no point in running this test.

The steps that follow are for calculating simple pairwise comparisons by hand for four samples A B C and D. You’ll need descriptive statistics data (the sample means) plus data from ANOVA (like mean squared error).

ANOVA Data (from the ANOVA output)

Step 2: Use the following formula to find a set of Scheffe formula values (you will use these in the next Step):

Step 3: Compare the values in Step 1 to the values in Step 2 and find any values that are larger than the comparison values. Larger values are statistically significant at your chosen alpha level (in this case, 0.05). For this example, the only value that isn’t significant is AD, because 0.21 is smaller than 0.33. 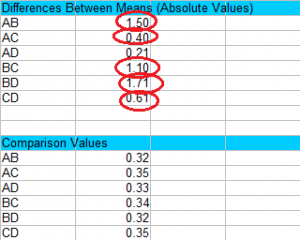